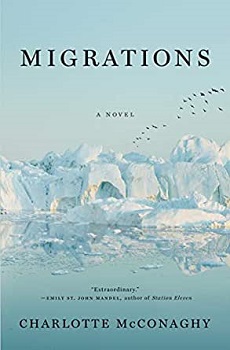 Although author Charlotte McConaghy has published eight young adult books in Australia, she makes her U.S. debut with her first adult title Migrations, a haunting meditation about nature on the verge of collapse that combines McConaghy’s love of nature and her interest in stories about fierce women.

Franny Stone has never been good at staying put, an affliction that was either inherited from her mother who left when Franny was young, or is a “creaturely” tendency towards wildness derived from her affinity for animals and the natural world.

The book begins with Franny looking to catch a ride on a seafaring fishing boat, hoping to convince the captain to chart his course to follow what is expected to be the last migration of the only Arctic Terns that remain on Earth. Franny longs to follow the terns on their epic trip from Greenland to Antarctica as witness to the last battle of these brave and intrepid birds, but possibly for other reasons only known to herself.

Franny convinces Ennis Malone, captain of the last remaining fishing vessel in Greenland the Saghani, to allow her passage on his ship. They will follow the radio signal of three banded terns with the promise that the birds will lead the Saghani to fish, whose numbers are terribly depleted by overfishing and warmer seas brought on by human-induced climate change.

While Franny may have won over Ennis Malone, his longtime crew members are skeptical of the newcomer and her strange mission. With a landlubber’s naiveté, when Franny mutters “good luck” as a response to a comment, they take it upon themselves to school her in the superstitions of the sea—“good luck” is bad luck, don’t leave port on a Friday, or open a tin upside down, eat bananas or whistle.

Franny loses herself in the hard work of the ship; she is assigned all of the worst jobs and throws herself into them 100 percent, eventually winning over the crew’s grudging admiration and finally their acceptance, which provides Franny with a sense of community that she has never before experienced.

She still has her secrets, though, and her past is haunted by events that are revealed in short flashback chapters. A childhood being raised by a cold and unsentimental grandmother, prison time served for an unknown crime, a pile of letters written but never sent to a husband left behind. Even the escape of sleep is haunted by bouts of sleepwalking that put Franny herself and others in danger.

As the ship’s close quarters begin to reveal the terrible truths of Franny’s past, the Saghani loses contact with the terns during a harrowing storm. While in a Newfoundland port after the storm, the captain and crew learn that all commercial fishing vessels have been recalled and it is now illegal to fish commercially. Running from trouble onshore, the Saghani defies the order and heads out to sea, resuming its southerly direction in hopes of intercepting the terns, if any are still alive.

McConaghy communicates a real sense of desperation and urgency through Franny. She intentionally set Migrations in the near-future in the hopes that the story would make readers aware of the destruction we have caused to species on the planet; it is estimated that in the last 50 years alone, humans have caused the deaths of over 60 percent of all wild animals on earth.

While much of the experience of reading Migrations feels like a tragedy unfolding, Franny’s journey towards self-understanding and redemption is ultimately hopeful.

When asked about how she was changed by the writing of the book, McConaghy responded that Franny and the terns taught her to be braver, to cherish the natural world, to not take for granted the gift of having those we love in our lives, and that we are fortunate to be here. In the end, this was the message that I carried with me after reading this book and I hope you will, too.

Lisa Gresham is the Collection Services Manager at the Whatcom County Library System. Visit https://www.wcls.org to place holds and find out about curbside hold pickup services; or give them a call at (360) 305-3600 and they’ll happily place holds for you.