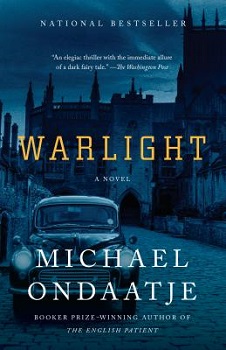 The minute you scan the first line of Michael Ondaatje’s graceful novel Warlight you are aware that you’re in the hands of a master storyteller.

His prose is spare but specific: “In 1945 our parents went away and left us in the care of two men who may have been criminals.” “Us” is our narrator, 14-year-old Nathaniel, and his 16-year-old sister Rachel, who take the abrupt news of their parents’ move from London to Singapore with little question and rapidly adapt to life with the mysterious lodger they nickname “the Moth.”

The Moth seems benign, if aloof, but surrounds himself with a host of shady characters who take to spending time at their home in Ruvigny Gardens. The precocious teens are intrigued rather than alarmed—until Rachel discovers her mother’s steamer trunk, elaborately packed but abandoned, hidden, in the depths of the basement.

What follows are Nathaniel’s attempts to decipher the enigma of his mother as he comes to terms with his abandonment and comes of age. In the Moth’s colorful associates, Nathaniel gains a variety of mentors and teachers, among them a former boxer nicknamed the Pimlico Darter, ethnographer Olive Lawrence, a veterinarian who knows how to pick locks, and super-serious, bespectacled Arthur McCash.

The Darter introduces Nathaniel to the shadowy world of greyhound racing and Nathaniel proves he has a high tolerance for moral ambiguity. As Nathaniel gets older, he’s recruited by British intelligence, where he begins to put together the pieces of his mother’s past. As Rose herself admits, “My sins are various,” but that’s as much clarity as she’ll ever give.

Ondaatje seems to be shining a light on the legions of unknown, unrecognized heroes who played a role during wartime, and the prolonged, lasting effects of their sacrifices. It’s also about the difficult relationships between mothers and their children, and the deep human need to understand our own personal histories.

Ondaatje’s ability to set a vivid scene is in fine force—such as when Nathaniel and his uninhibited lover Agnes joyously cavort naked in a darkened, empty house with a pack of mongrel racing dogs destined to be returned to the animal shelter. He packs in crisp, cogent details while retaining an air of mystery.

If World War II/Cold War espionage is up your alley, you may also enjoy Alice Network by Kate Quinn, Transcription by Kate Atkinson, or the nonfiction title A Covert Affair: Julia Child and Paul Child in the OSS (yes, that Julia Child, although the book is more about Jane Foster).

Readers seeking nonstop action and adventure may be disappointed—Warlight is deliberately murky, quiet and cerebral. But those who savor exquisitely crafted prose and complex characters will find both here. If for some reason you’ve never read The English Patient it’s worth a look—as is the stellar film directed by Anthony Minghella. Anil’s Ghost, about a Sri Lankan forensic pathologist identifying victims of a vicious civil war, is another fine example of Ondaatje’s power and skill as a writer.