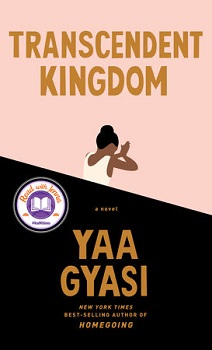 While Yaa Gyasi’s debut novel, Homegoing, was epic in scope, weaving together generations of voices covering 300 years of life in both Ghana and America, her recently released second novel, Transcendent Kingdom, turns to the intimate quarters of family, faith and the mother-daughter relationship.

Gifty is a sixth-year doctoral student working on a neuroscience degree at Stanford. She is most comfortable in the lab researching neural pathways by addicting her lab mice to Ensure and studying why some of them continue to seek rewards even when there is high risk involved. On the rare occasion that she dates, when asked what she does for a living, Gifty jokes that her job is getting mice addicted to cocaine.

After being contacted by the pastor of her childhood church who informs Gifty that her mother is once again bedridden with depression, Gifty brings her mother from Alabama to California to care for her. Suddenly, Gifty has to divide her time between the lab and brainstorming what might bring her mother out of her stupor, playing favorite hymns and preparing special Ghanaian food—to no avail.

In the quiet of the apartment, her mother endlessly sleeping in the bedroom, Gifty reflects back on her childhood. Gifty’s mother and father (who they call the Chin Chin Man) immigrated from Ghana to Alabama when her brother Nana was a baby. When the American Dream proved to be a lie for the Chin Chin Man, he went back to Ghana, ostensibly to visit his brother, but never returned. Gifty’s strong-willed and proud mother keeps the family going, but is scarred by this betrayal and becomes even more emotionally distant from her children.

The next fate befalls the family when Gifty is 11 years old and her brother, Nana, a gregarious, charismatic person and gifted athlete, becomes addicted to OxyContin after an ankle injury on the high school basketball team where he was the star scorer. After Nana’s death from a heroin overdose, her strong and domineering mother succumbs to a deep and pervasive depression, rarely leaving her bed and abandoning Gifty to grieve alone and fend for herself.

Gifty’s mother brought deep religious beliefs with her from Ghana and Pentecostal church services are a focus of their family life. Starting at a young age, Gifty keeps a journal, addressing all entries to God, and it is through this journal that she struggles with her aloneness and the loss of both Nana and her mother. Eventually, Gifty becomes defiant and stops attending church altogether, unable to reconcile her faith with the losses the family has suffered.

Although the adult Gifty no longer keeps a journal or prays and remains disillusioned with the religion of her youth, she turns instead to science to explain the world, seeking logical answers to the illogical questions of faith. She still believes in mystery, but now she touches the mystery through her explorations of the wondrous workings of the brain.

Transcendent Kingdom will resonate with readers interested in the intersection of science and religion, the devastating effects of addiction and depression, and in how the experience of immigration impacts families. With Transcendent Kingdom , Gyasi (pictured) has solidified her position as a gifted master of creating time, place, and character, and as one of America’s most brilliant young writers.

Lisa Gresham is the Collection Services Manager at the Whatcom County Library System. Visit https://www.wcls.org to place holds and find out about curbside hold pickup services; or give us a call at (360) 305-3600 and we’ll happily place holds for you.