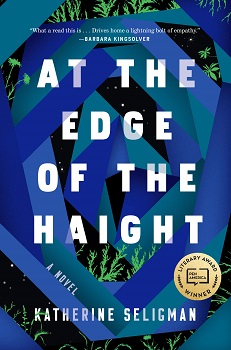 At the Edge of the Haight by Katherine Seligman

One night several years ago while driving through Golden Gate Park, journalist Katherine Seligman and her husband were stopped by a frantic man who jumped in front of their car, pleading with them to stay with him and saying that someone was threatening to kill him. They called the police, and Seligman’s husband followed where the man was pointing and saw an injured young man lying on the grass, gasping his last breaths.

Shaken by the event, Seligman (pictured) learned that no one was ever charged with the murder and found herself wondering about the young man’s family and how he came to be in trouble in the park that night. When questioned, police said they didn’t know what happened, but that “neither of these guys was up to any good.”

These real-life events form the opening scenes of Seligman’s fiction debut, At the Edge of the Haight. Maddy Donaldo, homeless at age 20, lives in the hidden places in Golden Gate Park where she and her makeshift family have claimed an area as their encampment. A nearby shelter provides support in the way of meals and showers, and she relies on her pit bull mix, Root, for companionship as well as protection.

Witnessing the death of the young man, Shane, haunts Maddy, as does the fact that she was seen by the supposed perpetrator and fears he will hunt her down to keep her quiet. Shane’s father Dave turns up at the park, hoping to learn more about Shane’s last days and what his life on the street was like. Dave and his wife, Marva, try to convince Maddy to reunite with her mother, who Maddy last saw in a boardinghouse after her mother suffered a breakdown.

Dave and Marva’s desire to spend time with Maddy and the stability they represent awaken feelings of longings and reflections on the meaning of family. Maddy’s mentally ill mother was never able to adequately care for her, and the foster family and distant cousins that she lived with for a time abandoned her when the commitment became inconvenient. Maddy has done her best to create a family of choice in her friends Ash, Hope, and Fleet, but finds herself questioning the strength and longevity of these bonds.

Having lived for 25 years in the Haight Ashbury neighborhood, Seligman knows this territory well. As a journalist, she has covered homelessness issues for the San Francisco Chronicle Magazine, San Francisco Examiner, and USA Today.

In addition to her years of experience living in this neighborhood, Seligman did research for the novel by spending time in area hospital ERs and the court system watching how people experiencing homelessness are treated. She also befriended several young people who generously shared their stories and helped her understand the challenges of life on the street and how it is a full-time job just to take care of basic needs.

At the Edge of the Haight was the 2019 winner of the PEN/Bellwether Prize for Socially Engaged Fiction, a prize established by author Barbara Kingsolver to bring manuscripts by promising new authors to print. Previous Bellwether winners include The Leavers by Lisa Ko, Heidi Durrow’s The Girl Who Fell from the Sky, and Hillary Jordan’s Mudbound.

Stories like these increase our ability to feel empathy and may compel readers to examine their own prejudices. In the character of Maddy, Seligman strove to make visible the lives of people we may walk or drive past every day, hoping readers would come to understand that “someone you see on the street often isn’t so different from your own child, or your sister.”

Lisa Gresham is the Collection Services Manager at Whatcom County Library System (WCLS) which brings the power of sharing to rural Whatcom County. At the Edge of the Haight is available in print, eBook, and eAudiobook. For details, go to https://www.wcls.org. Photo of the author by Penni Gladstone.