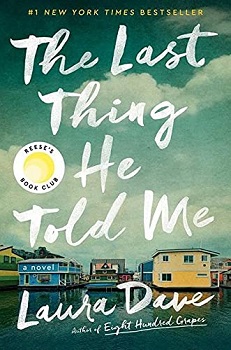 The Last Thing He Told Me by Laura Dave

Sometimes when the world is heavy, a book that’s not too complicated and not too dark can be just the thing for a rainy or windy weekend. The Last Thing He Told Me by Laura Dave fits the bill. It’s not quite a thriller, not quite a mystery, and serves up a believable stepmother-daughter relationship with enough intrigue to keep the pages turning.

Hannah Hall is still easing into married life, adjusting to her move from bustling New York City to sleepy Sausalito, building her wood-turning business, and trying to win the heart of her resistant 16-year-old stepdaughter Bailey, when a girl knocks on her door and hands her a note that upends her world. “Protect her,” it says, and immediately Hannah knows what it means. She must protect Bailey. But from what? Or from whom? And where is Hannah’s husband Owen?

At first, Hannah is puzzled, but only mildly alarmed. She starts leaving Owen messages that go straight to voicemail. When he doesn’t show up that evening, she hears a news report on the radio—the CEO of The Shop, the company Owen works, for has been arrested on suspicion of fraud. Senior staff are likely implicated. More indictments will follow. She picks up Bailey from a school event and discovers that Owen left a duffel bag stuffed with rolls of cash in Bailey’s locker, along with a note. “Please help Hannah. Do what she tells you.” Owen is missing, and now the former adversaries only have each other.

Although Hannah and Bailey don’t immediately become fast friends, Dave presents a believable account of their improved relationship and growing trust. She provides backstory in flashbacks that start at 24 hours earlier, jump six weeks back, then three months prior, eight months, and so on. Each time you get a clearer picture of Owen’s past—and Hannah’s—and begin to understand what happened and why Hannah is the perfect person to be handling the situation put before her.

Hannah receives a visit from a U.S. Marshal who claims to be investigating the dealings of The Shop. According to him, Owen’s mixed up in something criminal and dangerous. Then the FBI shows up, and they claim no knowledge of the marshal. Hannah doesn’t know who to trust—but realizes that sometimes if you need something to be done right, you need to do it yourself. So, with Bailey in tow, she ventures forth to figure things out.

Many readers will agree that it seems highly unlikely that anyone receiving a cryptic note and several visits from law enforcement wouldn’t have a major freakout and become paralyzed. Hannah’s actions—heck, big chunks of the entire plot—are far-fetched. However, that’s part of the fun of reading this book—to not take it very seriously and just enjoy the ride. It’s interesting to ponder: if I were Hannah, would I make the same choices she does? Dave throws in a last-minute twist to keep readers guessing, and it’s just the thing to see the book through to the end.