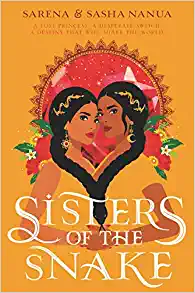 Sisters of the Snake by Sasha Nanua

Ria is an orphan and a thief, stealing to keep herself alive. Rani has only ever known life inside the palace where she is being trained to take over from her father as queen. When their lives collide, everything turns on its head because Ria and Rani, orphan and royal, are look identical. They decide to switch places to help each other get what they want; Rani to prove herself to her father and Ria to escape her conscription into the army, but neither realize the danger that lies ahead.