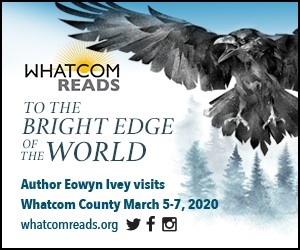 For its 12th annual season, Whatcom READS, Bellingham and Whatcom County’s countywide book club, welcomes author Eowyn Ivey to town March 5-7 to discuss her book To the Bright Edge of the World. The events at five venues in Ferndale, Bellingham and Lynden are free; no reservations or tickets are required. Arrive early to secure a seat. For more information and to see the full list of events, including many leading up to the author’s appearances, visit whatcomreads.org.

WHATCOM READS 2020 AUTHOR EVENTS – Free and open to the public; arrive early to secure a seat

Whatcom READS 2020 culminates with five presentations by author Eowyn Ivey. The 2021 title will be announced at the March 5 event at the Mount Baker Theatre.

Book Discussion with the Author

An Evening with Eowyn Ivey

Whatcom READS welcomes author Eowyn Ivey to the Mount Baker Theatre Main Stage for a presentation about her novel To the Bright Edge of the World. The evening closes with the announcement of the 2021 Whatcom READS title.

The Art and Craft of Writing

Eowyn Ivey discusses the art and craft of writing. Writers of all experience levels will gain insights into the writing process.

Start your weekend with a cup of coffee and an inspiring conversation with author Eowyn Ivey. There will be ample time for audience questions.

A Conversation with Eowyn Ivey

Last chance to hear from this year’s featured author. Paul Hanson, co-owner of Village Books and Paper Dreams, will interview Eowyn at the Jansen Art Center’s beautiful second-floor meeting room. Arrive early to purchase a beverage from the Firehall Café.

“Winter is Whatcom READS ‘season,’” says Ann McAllen, Whatcom County Library System adult programming coordinator and chair of the Whatcom READS committee. “The nights are long, and the rain falls steadily. It’s an ideal time to discover a new book and to come together as a community to celebrate reading. This is a community of readers and writers. Whatcom READS celebrates and encourages that spirit.”

About Whatcom READS: Now in its 12th year, Whatcom READS is presented by all the public and academic libraries in Bellingham and Whatcom County and community partner Village Books. Funding sponsors are Friends of the Bellingham Public Library and Whatcom County Library Foundation. Whatcom READS is generously supported by numerous community collaborators.  Check out To the Bright Edge of the World at the library or purchase it from Village Books, which donates 10% of all sales to Whatcom READS. Learn more at whatcomreads.org.

About 2020 Featured Author Eowyn Ivey: Eowyn (pronounced A-o-win) LeMay Ivey was raised in Alaska and continues to live there with her husband and two daughters. She worked for nearly a decade as a bookseller at independent Fireside Books in Palmer, Alaska, and prior to that as a reporter for the local newspaper, The Frontiersman. Eowyn is a graduate of Western Washington University in Bellingham. Her debut novel, The Snow Child, was a New York Times bestseller published in more than 25 languages. It was a finalist for the Pulitzer Prize, a UK National Book Award winner, an Indies Choice award for debut fiction, and a PNBA Book Award winner. Her second novel, To the Bright Edge of the World, was published in 2016. Described as an atmospheric, transporting tale of adventure, love, and survival, it landed on numerous “best book” lists. Eowyn’s essays and short fiction have appeared in numerous publications. Learn more about the author at eowynivey.com.