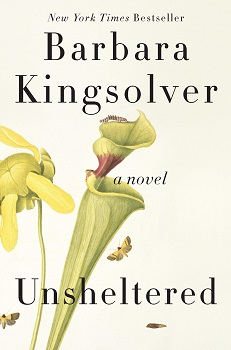 With trademark style, Barbara Kingsolver’s new novel, Unsheltered, tackles political and social justice issues through the story of two families inhabiting the same house, separated by more than a century, who find themselves terribly at odds with the changing world around them.

Willa Knox and her husband Iano are an educated professional couple whose world begins to fall apart when the magazine Willa is writing for goes out of business and the college where Iano is tenured closes its doors.

Iano finds an entry-level teaching position near Vineland, New Jersey, in happy proximity to a house they recently inherited. It soon becomes apparent, however, that, much like their lives, the house has a host of problems due to being built on an “insufficient foundation” and is threatening to come apart at the seams.

Struggling to make ends meet on one much-reduced income, Willa and Iano are further challenged when Tig, their 20-something daughter who has been incommunicado for several years, moves back home. Add to the mix caring for Iano’s cranky father, Nic, with his host of health problems. Then their Ivy-League-educated son experiences a tragedy and they take over the care of their infant grandson.

Suddenly, Willa and Iano find themselves with an empty bank account, no adequate health care coverage, living in a house they cannot afford to fix and asking themselves how things could have gone so wrong when they thought they did everything “right.”

Willa begins researching the history of the house, hoping to learn something that might qualify them for grant restoration money. She learns that the Vineland community was founded as a Victorian-era Utopia, and that a science teacher who believed in the theory of evolution (at odds with the community founders) lived in their house in the 1870s. Even a century before, Thatcher Greenwood despaired at the condition of the structure, which though newly built was poorly designed and executed, described by a contractor as the “whole house is at odds with itself.”

Thatcher loves his prim and proper wife, Rose, but often feels he doesn’t measure up to her standards. Rose’s social-climbing mother and teenage sister, Polly, also live with them; Polly’s fresh outlook and budding young feminism keep the story lively.

Thatcher takes intellectual refuge in the company of his neighbor, Mary Treat, a historical personage and scientist in her own right who corresponded with many of the great thinkers of the day and whose work informed Charles Darwin’s theories. Treat explores the appetites of carnivorous plants and keeps jars of tower-building tarantulas on her windowsills, disguised as terrariums so as not to shock the ladies who call on her.

Kingsolver is well-known to be unapologetically liberal in her political orientation, and Unsheltered is no exception, tackling Trump-era themes and communicating the existential threats that rock the foundations of so many people today.

In celebration of the release of Barbara Kingsolver’s newest novel, Village Books introduces a limited-run open book group that will delve into the rich history of her past books on the second Tuesday of each month, culminating in a discussion of Unsheltered in November of 2019. Each discussion will be facilitated by one of Village Books’ many booksellers or by a special guest. January’s discussion will focus on Homeland: And Other Stories. With the same wit and sensitivity that have come to characterize Kingsolver’s highly praised and beloved novels, she gives us a rich and emotionally resonant collection. Spreading memorable characters over landscapes ranging from Northern California to the hills of eastern Kentucky and the Caribbean island of St. Lucia, Kingsolver tells stories of hope, momentary joy and powerful endurance. In every setting, Kingsolver’s distinctive voice—at times comic, but often heartrending—rings true as she explores the twin themes of family ties and the life choices one must ultimately make alone. Find Unsheltered—and Kingsolver’s other novels—at your local library in regular print, large print, or eBook formats, as well as book-on-CD, Playaway, and eAudio sound formats.