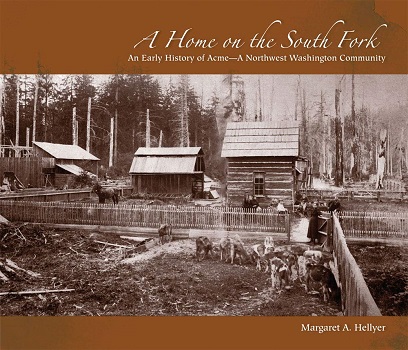 A Home on the South Fork: An Early History of Acme by Margaret A. Hellyer

After reading A Home on the South Fork: An Early History of Acme by Margaret A. Hellyer, it is easy to conjure the wild place this river valley once was: ancient cedar and fir trees growing tall in fertile soil; the south fork of the Nooksack River running thick with salmon, crossed by logjams of old growth.

For millennia, Coast Salish peoples lived well among this wildness until the lure of the U.S. Homestead Act of 1862 brought a hardy group of white families from lands abroad to this area of Whatcom County. A descendent of such settlers, Hellyer follows her family’s homesteading adventures and those of other settler families that made claim to the South Fork Valley in the 19th century.

For new arrivals, it was no easy task to navigate the bottomlands after the 12-mile trip across Lake Whatcom to the boat landing at Park, and then nine more miles traversing the hardscrabble trail to Acme. Once in the valley, settlers had to endure long winters and hard summers proving up a claim. This was too daunting for some, but many stayed and persevered.

Hellyer’s text is replete with excerpts from letters, journals and newspaper articles that reveal the character of the times. The book can be opened at any place and the reader will find something of interest.

I particularly enjoyed Chapter 6: “Slates and Inkwells: Education in the Valley.” It tells about the Saxon School District, approved in 1887, which served 84 square miles with local, one-room schoolhouses until the current Acme Elementary School was built in 1938. It’s hard not to view the many photographs of serious and earnest-faced children without wondering what mischief these youth were getting up to as soon as the camera was put away.

It is fascinating to see the pictures carefully reproduced on each page and understand the impact made upon the landscape in just a few decades—the town of Acme springing from the forest with the stumps of the giant trees in the background. The settlers were extremely industrious, advocating for a post office, a voting district, a water district, roads and electricity for their burgeoning community. Their awe and pleasure in the country is apparent in many of the photos: women wading in the river, picnics in the woods, woodsmen posing next to ancient timber.

It is this history Hellyer so beautifully lays out in A Home on the South Fork, published by South Fork Press in 2018. The book is lovely in its outlay, large in format, and studded with photographs from the author’s private collection.

Hellyer, whose own valley roots stretch back four generations, spent 10 years writing this valuable contribution to rural history. She tells the South Fork story with thoroughly researched and detailed information collected from a well-documented variety of sources.

The book forms a bridge to the present and enriches the sense of place for those of us that live here, and it will be a resource and a joy for anyone with an interest in Whatcom County history.

Katrina Carabba is the branch manager of the WCLS Deming Library.