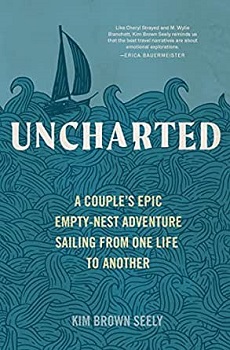 Uncharted: A Couple’s Epic Empty-nest Adventure Sailing From One Life to Another by Kim Brown Seely

As the COVID-19 pandemic continues, the prospect of chucking it all and sailing off into the sunset has a certain appeal. A change of scenery, some fresh sea air, a chance to slow down time and escape, far from the madding crowds—all sound like the antidote to our restricted lives these days.

More than a decade ago, Kim Brown Seely and her husband Jeff felt a similar pull. With a recession looming, jobs tenuous and their youngest son heading off to college, the Seelys took the plunge and purchased a used Moody 54 (bank-owned and in need of work—but likely still in the low-to-mid-six digits for those wanting to plan their own adventure). Then they took off from Seattle on a journey to Canada’s Great Bear Rainforest.

Kim had been a travel writer and editor for many years, whose work appeared in Travel & Leisure, National Geographic Adventure, and Virtuoso Life. What she had not been was a sailor—that was her husband’s department. Having learned to sail as a kid, Jeff had done some racing as a young adult, crewing weekends on a 51-foot sailboat. Once the idea to buy a boat took hold, Jeff went big, the lure of a screaming deal too good to pass up. Instead of starting with a more modest 30-footer, Jeff and Kim bought a “big girl,” a 54-foot beauty they renamed Heron.

Kim was the one who determined their destination. Inspired by a National Geographic cover story on spirit bears, she dreamed of sailing to the Great Bear Rainforest in northern British Columbia to catch a glimpse of the rare and legendary creatures.

With a self-proclaimed “weakness for remote,” Kim landed on a place that met the definition in every way—500 nautical miles north of Seattle, a one-month journey up the Inside Passage and beyond.

The timing of their trip—coinciding with their son James’ departure for St. Lawrence University—was deliberate. The Seelys wanted a distraction from their empty nest, a chance to reconnect as a couple, and an adventure while they were still fit and able.

While they had a few close calls, their journey and Kim’s subsequent memoir, Uncharted: A Couple’s Epic Empty-Nest Adventure Sailing from One Life to Another, is less about action and more about introspection. Kim writes frankly about the challenges of living in close quarters under stressful conditions. (In my opinion, Jeff does not come across as a sympathetic character, but Kim attests that she understands his gruff nature and loves him nonetheless, so who’s to judge?)

Perhaps of greater interest is the insight into what goes into planning a months-long sailing venture—the gear, the provisions, the charts and tide tables. Kim tours us through the Heron’s spacious cabin and catalogs the books they bring for reference and the ports of call along the way.

Kim revels in the natural beauty around her as they head north. She is awed and reverent by humpback whale sightings and by ancient forests. She writes eloquently of a hidden Kitasoo longhouse tucked between a stand of Sitka spruces.

The armchair travel aspect of Uncharted is especially welcome while cooped up inside due to wildfire smoke, cool autumn temperatures and COVID restrictions. While it may not be realistic for most to make this journey in real life, we all can enjoy this glimpse of the Pacific Northwest, safe at home.