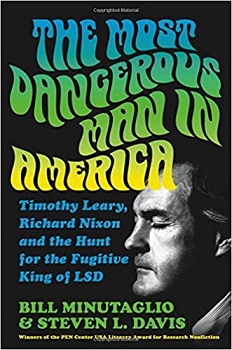 The Most Dangerous Man in America: Timothy Leary, Richard Nixon and the Hunt for the Fugitive King of LSD by Bill Minutaglio

For those who think the past four years of the Trump era have been over-the-top outrageous, take a magic carpet ride back to the early 1970s via Bill Minutaglio and Steven L. Davis’ new book, The Most Dangerous Man in America: Timothy Leary, Richard Nixon, and the Hunt for the Fugitive King of LSD.

Dodging increasingly violent Vietnam War protests and frequent attacks from his Democratic opponents, Nixon—who was running for reelection—seizes on a war on drugs as a way to deflect attention from his shortcomings and generate support. Before long, he identifies his scapegoat: Dr. Timothy Leary, the former Harvard professor known as the High Priest of LSD.

In May 1970, Leary, the counterculture rock star whose mantra “turn on, tune in, drop out,” encouraged legions of young people to experiment with hallucinogenic drugs, is busted for possession of less than an ounce of marijuana and sentenced to 10 years at the California Men’s Colony. His former opponent for the California gubernatorial race, Ronald Reagan, is relieved: “I’m terribly frightened by LSD. I think there’s been a great deal of misinformation by those who seem to see no harm in it.” But Reagan’s reprieve is short-lived: Aided by members of the Weather Underground, Leary shimmies up a tree and over the prison fence to freedom.

Here’s where Leary’s story starts to get really weird. After a mad dash up I-5 and a few days at a safe house in Skykomish, his new radical friends convince him to leave the country. Algeria is suggested. U.S. diplomatic relations with Algeria have been strained and the Algerian government has recently granted Eldridge Cleaver asylum—even providing the Black Panthers leader an official embassy.

Urged by Weatherman Bernardine Dohrn, Leary pens a radical manifesto, pledging to “stay high and wage the revolutionary war.” Nixon’s worst nightmares are coming true—Leary’s escape is bringing more attention to the counterculture revolution. Nixon sics the FBI on Leary but, transformed with a square haircut and drab brown suit and armed with a phony passport, Leary jumps a jet to Algiers.

It just gets wilder from there, and authors Minutaglio and Davis do an excellent job chronicling the ins and outs of Leary’s tumultuous relationship with the fiery leader of the Black Panthers, Leary’s astounding consumption of all manner of illegal substances, and his earnest conviction that if everyone (Nixon, Cleaver, the whole lot) would just drop acid together, the world would be a better place.

When Algeria becomes untenable, Leary is once again on the lam, dashing from country to country in attempts to avoid extradition. Penniless and without a plan, Leary nevertheless manages to live the high life wherever he goes. As Nixon gets more desperate to nab the man he dubs “the Most Dangerous Man in America” he also loses grip on his sanity on the home front.
Minutaglio and Davis provide an extensive bibliography and have clearly done their research. They excel at throwing in tantalizing pop culture details. Leary’s popularity with celebrities and his legions of fans makes for interesting escapades. Although this is not a comprehensive biography, but rather an in-depth look at this specific period of Leary’s life, it does give glimpses of this intriguing, contradictory, notorious figure.