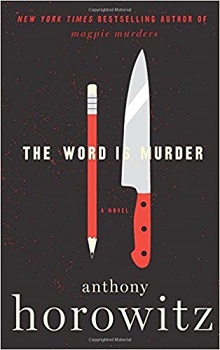 The Word is Murder by Anthony Horowitz

Chances are, you’ve read one of British author Anthony Horowitz’s novels or seen one of his television shows. With more than 40 books under his belt (the Alex Rider series about a teenage spy has sold over 19 million copies) and BAFTA Awards for the television series Foyle’s War and Midsomer Murders, Horowitz has also written 11 episodes of Agatha Christie’s Poirot.

Horowitz received a commission from the Conan Doyle estate to write two original Sherlock Holmes novels and another from the Ian Fleming estate to write new James Bond adventures. But The Word Is Murder is the first time that Horowitz is actually a character in his own novel—a device readers will either find clever and entertaining (I did) or egotistical and off-putting. If you can tolerate a first-person narrator and some self-referential commentary, you’re in for a lively whodunit.

Here’s the setup: A stylish 60-year-old Londoner visits a funeral parlor to arrange her own funeral. Six hours later, she’s murdered. Hawthorne, a former Detective Inspector for the Metropolitan Police Service who left under a black cloud, is nevertheless engaged as a police consultant to help solve this case.

Hawthorne, prickly and taciturn, has managed to rope in Horowitz to shadow him, with the plan that Horowitz will pen a book about Hawthorne and they’ll share the profits, 50/50. Having written about many murders before but never participated in any real-life murder investigations, Horowitz is intrigued by the opportunity to get an inside view into the proceedings.

Hawthorne, though gruff, is clearly intelligent and observant. His methods of deduction hearken back to Sherlock Holmes, one of Horowitz’s beloved fictional characters. While Hawthorne insists that Horowitz keep his mouth shut when they’re interviewing witnesses and suspects, the author can hardly contain himself and easily gets caught up in the action.

Breaking the fourth wall, Horowitz freely admits it has been his long-held desire to write a book about writing, such as Stephen King’s highly regarded On Writing: A Memoir of the Craft. Yet Horowitz concedes that it’s been done before and he’s not the one to do it better. Instead, he peppers The Word is Murder with colorful anecdotes of his time on movie and television sets shooting the Alex Rider feature film and Foyle’s War.

He drops names liberally and is particularly thrilled (in a self-deprecating way) to recount a meeting he had with Stephen Spielberg and Peter Jackson to discuss his script for the Tintin 2 movie sequel. This could become tedious or self-indulgent, if he didn’t keep you guessing about which items are real and which are fantasy.

If you read the book as a lark, you’ll have fun sorting through clues, red herrings and pop culture references to solve a mystery that is well in keeping with an Agatha Christie caper, with a satisfying resolution. And, if you’re ready for more, the follow-up novel The Sentence Is Death is also available to borrow from your public libraries in multiple formats. Visit https://www.wcls.org to place a hold.