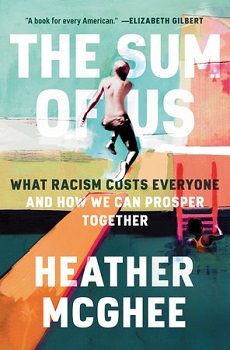 The Sum of Us: What Racism Costs Everyone and How We Can Prosper Together by Heather McGhee

As the former president of the progressive think tank, Demos, Heather McGhee spent 20 years looking for solutions to economic inequality and other big social problems before realizing she was hitting the same wall. That wall came to be defined by the question, “In America, why can’t we just have nice things?” such as reliable and modern infrastructure, universal healthcare, or well-funded, state-of-the-art schools—all social components that seem like they would be no-brainers in the wealthiest nation in the world.

Her new book, The Sum of Us: What Racism Costs Everyone and How We Can Prosper Together, grew from this question and the realization that lasting change was more likely to come from shifts in public opinion rather than policy alone, embarking McGhee (pictured) on a personal journey into the hearts of Americans to reveal the falsehoods of the zero-sum game that has limited our collective vision of what we can be to one defined by scarcity.

So where does this perception of scarcity come from? One of the early points made by McGhee is that white Americans began to tend more conservative on political issues after being told that they would likely lose majority status in the near future. She found that white Americans are likely to perceive racial interests as a zero-sum game—if something benefits people of color, it must mean that it will take away from white people.  The Sum of Us sets out to demonstrate the ways that racism hurts all of us.

Using a mixture of in-person interviews, history, economics and scholarly studies, McGhee paints a story of racism’s costs. The conversations she has with ordinary Americans on her cross-country journey from Maine to Mississippi to California illuminate the studies she cites, as white people share stories of economic hardship, thwarted dreams, and vulnerability caused by lack of adequate health care coverage.

She also heard from these white people that many of them believed in the zero-sum game. In Mississippi, McGhee meets Joey, a white factory worker whose white coworkers voted “no” to joining a union that would have given them better wages and working conditions, essentially because “If the Blacks are for it, I’m against it.”

Bridget, a white woman in Kansas City who had spent her whole life trying to make ends meet working in the fast food industry, realized the falsehood of the zero-sum game when, at an organizing meeting to raise the minimum wage, she saw herself in a Latina woman describing the exact same life struggles. Bridget realized that “as long as we’re divided, we’re conquered.”

The key to a better world for all of us, McGhee argues, is the Solidarity Dividend; letting go of our zero-sum game mentality to make gains that will help all Americans—higher wages, cleaner air, better-funded schools. McGhee’s clear and convincing vision is ultimately hopeful as she shows us how we can cash in on the Solidarity Dividend by coming together across race to make life in America better for all of us.

Ibram X. Kendi, author of How to Be an Antiracist, says of The Sum of Us, “This is the book I’ve been waiting for.” Perhaps it is also the book we all should have been waiting for, the catalyst that will show white Americans the path to making diversity our superpower and to fully activating the promise of “We the People.”

Lisa Gresham is the Collection Services Manager at Whatcom County Library System, which brings the power of sharing to rural Whatcom County. Visit https://www.wcls.org to place holds on library materials and learn about curbside holds pick up, in-person and other library services.