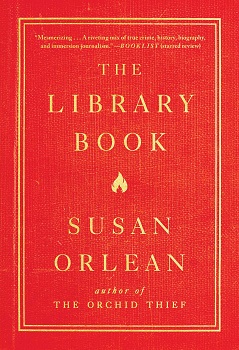 The Library Book by Susan Orlean

Susan Orlean loves libraries, but she didn’t set out to write a book about them. In fact, the bestselling nonfiction author and staff writer for The New Yorker had decided that she was done writing books entirely. “Working on them felt like a slow-motion wrestling match,” she declares, “and I wasn’t in the mood to grapple with such a big commitment again.”

But in 2011 Orlean learned about the devastating fire that swept through the Los Angeles Public Library’s Central Branch years before. The unsolved mystery of the fire intrigued her. Almost before she knew it, Orlean began researching the fire and the history of the library itself, the results of which are woven together in her enthralling new work, The Library Book.

When bells began to sound at the Central Library on April 29, 1986, everyone thought it was another false alarm. Between temperamental smoke detectors and the general mischief that happens in an overcrowded building, alarms were a frequent annoyance. This time, though, the fire was real. A spark deep in the stacks quickly ignited into a blaze that burned for more than seven hours, at temperatures exceeding 2,000 degrees.

When all was said and done, more than 400,000 books were completely destroyed and 700,000 more were damaged. Many were irreplaceable. It was a catastrophic loss, the most significant any American public library has ever sustained.

In the aftermath, while arson investigators set out to find the culprit, the mandate for library officials was clear: restore operations. Help came from all quarters, whether it was donating books, restoring damaged materials or reassuring the traumatized staff. The library’s tragedy was the city’s tragedy.

As readers learn, this was not the first time Los Angeles galvanized around their library. The Library Book reaches back to the city’s infancy, when civic leaders recognized that a library would put Los Angeles on the map. Journeying through history, we meet fascinating individuals like Mary Jones, who became city librarian in 1880 when women were not even permitted library cards; and eccentric Charles Lummis, who accepted the directorship, then walked from Ohio to Los Angeles.

Perhaps what this compelling, deeply researched book does best is take readers inside the Los Angeles Public Library, and by extension, modern libraries around the country. Blowing dust off the image of libraries as sleepy relics, Orlean shows libraries for what they really are—vibrant community centers humming with life, where staff connect patrons with resources, lead classes, support families and share materials.

The Library Book rings true to all those who know libraries and the crucial role they play in a democratic society. It is at once a history, a crime story, and a love story that springs straight from the author’s heart—a passionate homage to libraries, their caretakers, and the mission that drives them.

In the final pages, Orlean writes: “This is why I wanted to write this book, to tell about a place I love that doesn’t belong to me but feels like it is mine…. All the things that are wrong in the world seem conquered by a library’s simple unspoken promise: Here is my story, please listen; here I am, please tell me your story.”

Mary Kinser is Collection Development Librarian for Whatcom County Library System, where she selects fiction, DVDs, music and audiobooks for adults. She can almost always be found with a book in her hand.