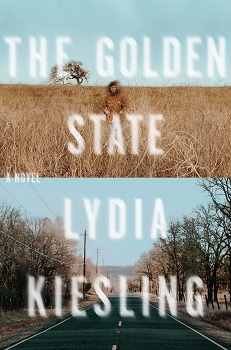 The Golden State by Lydia Kiesling

After the forest fires that raged across California recently, it’s hard to imagine the scenery of the high desert as brown and grassy but not charred and smoldering. However, in her new novel The Golden State, author Lydia Kiesling skillfully evokes a scorching summer in fictional Altavista, California, that will have readers fully engrossed.

Daphne, a 30-year-old first-time mother, has retreated with Honey, her toddler, to her grandparents’ abandoned mobile home on a whim, unable to face her job at a San Francisco University’s Center for Islamic Studies.

Her beloved husband, Elgin, lost his U.S. residency status and is stuck in Turkey mired in bureaucracy, and Daphne is folding under the strain of loneliness and single parenthood. She has a vague notion that the stark beauty of the rugged area she adored as a child will bring her some clarity as she ponders next steps. Also weighing on her is the death of a graduate student, killed in a car accident while overseas on a program Daphne coordinated.

As Kiesling relates Daphne’s sun-drenched and stultifying days in the hardscrabble remote desert, we get a keenly insightful portrait of the challenges of modern motherhood—the tedium, the repetition, the overwhelming love and sheer terror.

Packing up the diaper bag to haul Honey on a daily walk past the sagebrush and the Golden Spike to Sal’s Cafe, talking constantly to narrate every moment for Honey’s edification—it’s vividly real, as is when Daphne starts to wonder if she’s hallucinating Honey’s first words.

The details are modern—Daphne struggles with a Skype connection to check in with work; she shamefully downloads some Elmo videos using her Amazon Prime subscription to keep Honey occupied—but the general themes are timeless and universal.

Kiesling mixes some social commentary into the narrative about Daphne and Elgin’s forced separation, and contrasts their international worldview with that of Daphne’s rural neighbors, some of whom favor seceding from the state of California. Kiesling also introduces an elderly woman, Alice, who befriends Daphne when Daphne reaches her lowest point—but who has an agenda of her own.

Although the author has a bad habit of making frequent use of long, run-on lists, these can be skimmed over as one instead savors Daphne’s honesty and insight. There’s a lot to unpack in this novel, so it’s perfect for book clubs. Discussion can encompass writing style, figurative language, descriptions of place and internal monologues, as well as the themes of motherhood, immigration, loneliness and belonging.

Daphne’s run-ins with her neighbor Cindy’s group of State of Jefferson supporters, bent on securing the borders of a new 51st state, is particularly enlightening and thought-provoking. Whose state is the Golden State? What does this conservative, rural group of ranchers and farmers have in common with other Trump supporters across the country? How do we balance the needs of urbanites and rural residents? Immigrants versus disadvantaged multi-generational locals?

Kiesling does not provide any definitive answers, just a peek at one woman’s choices for herself and her family.