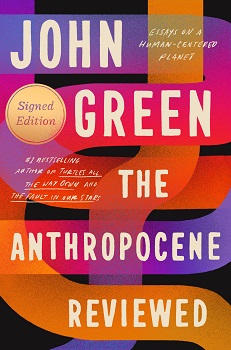 The Anthropocene Reviewed: Essays on a Human-centered Planet by John Green

What do Canada Geese, Diet Dr. Pepper, and the song “Auld Lang Syne” have in common?

In the mind of author John Green, these disparate topics become pitch-perfect prompts for essays exploring life in the Anthropocene, the current geologic age defined by human activity’s dominant influence on Earth’s geology and ecosystems.

Green is well-known for his young adult fiction; the critically acclaimed The Fault in Our Stars (2012) was made into a popular film and Turtles All the Way Down (2017), a novel about an American high school student who shares Green’s OCD and anxiety mental illness, became an instant bestseller. Green and his brother, Hank, also produce video blogs, podcasts and YouTube content.

When asked why he decided to change gears and write The Anthropocene Reviewed, essays published for an adult audience, Green describes how fiction may tell the author’s life story, but all in code. Readers had begun to imagine that they’d cracked Green’s code, confusing Green with his fictional Turtles All the Way Down protagonist, which made him realize he had tired of writing in code and wanted to share his life as it is.

Green was also struggling, as so many of us were, and are, with all the uncertainty of living through a pandemic, and found himself needing to focus on how “hope is the right response to consciousness.” These essays explore directly and earnestly how his life touches and is touched by big historical forces like the pandemic.

The result is a book that is serious and emotional and funny in just the right places—a perfect balm for world-weariness and, with each essay able to be read as a stand-alone and most less than five pages long, a great reading choice for busy, distracted people.

When Green writes about Scratch ‘N’ Sniff stickers, for example, he doesn’t just revisit the imperfect simulacrums of the pizza, mown grass, and cotton candy scratch ‘n’ stiff scents from his childhood collection. He also tells about how the stickers provided him comfort from the terrible bullying he endured in school, and explains the micro-encapsulation process that traps scent in a tiny drop of liquid that is released when broken; the same technology that provides Green adult comfort in the form of the timed-release medications that control his mental illness.

Each essay ends with Green giving the subject a rating based on the five-star rating model, so the World’s Largest Ball of Paint (yes, it is really a thing) gets four stars and teddy bears only get two-and-a-half stars (you’ll have to read the essay to find out why). Part of Green’s intention with these ratings, as well as pointing out the absurdity of our obsession with them, is to use them to help him “pay attention to what I pay attention to” and to invite readers to do the same.

A core contradiction at the heart of understanding the Anthropocene age is, as Green puts it, “we are at once far too powerful and not powerful enough.” We’ve radically reshaped the biodiversity of our planet, but aren’t powerful enough to choose how this reshaping is happening. We’ve escaped Earth’s atmosphere into space, but can’t escape suffering.

Green suggests that the antidote to the despair and suffering of living in a wounded world, largely of human making, can be found in our connections, in our capacity for wonder, and in falling in love with the world even while knowing how loving ends, and for this, I give The Anthropocene Reviewed four-and-a-half stars.

Lisa Gresham is the Collection Services Manager at Whatcom County Library System (WCLS), which brings the power of sharing to rural Whatcom County.