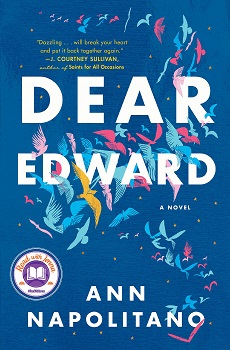 On the surface, the storyline of Dear Edward is simple: a flight from Newark to LAX crashes, killing all passengers save a 12-year-old boy who loses his entire family in the crash. (Note to self: this is definitely not a book to read on your next vacation that requires plane travel.)

But author Ann Napolitano (pictured) is adamant that this is not so much a story about a plane crash, as it is a story about how to make a meaningful life in the face of devastating loss. Author J. Courtney Sullivan describes it as a novel “will break your heart and put it back together again”.

Eddie Adler wakes up in a Denver hospital after the crash with no memory of what happened and stunned mute by the news that his mother, father and older brother, Jordan, have perished. After being discharged from the hospital, he goes to live with his aunt and uncle in New Jersey, whose home becomes a place of their intersecting griefs; Lacey and John, childless, recently suffered a miscarriage.

Chapters alternate between Edward’s life in the aftermath of the crash and the ordinary events that took place on the fatal flight prior to the crash. We come to know the aging business tycoon with incurable cancer; the capable and alluring first-class flight attendant; a veteran soldier returning from Afghanistan; an arrogant Wall Street trader; a free-spirited woman leaving a troubled marriage behind, and her seat partner who is coming to terms with an unexpected pregnancy.

Although it is clear from the beginning that none of these people survive, they become more and more real as the novel progresses. The flight storyline is given equal weight with Edward’s survival story, emphasizing that the loss of all these people, not just Edward’s family, is a weight he has to carry for the rest of his life.

The idea for the novel came from Napolitano’s obsession with the 2010 flight from South Africa to London that crashed in Libya, killing all passengers except a 9-year-old boy who was found a half-mile from the crash site still buckled into his seat. Social media use was just cresting at the time, and Napolitano modeled Edward’s elevation to a “celebrity survivor” after this boy’s experience.

The deepest loss for Edward is that of his revered older brother. Napolitano based Edward’s relationship with Jordan on that of her own sons, who were ages 1 and 3 when she began writing Dear Edward, and who she describes as being “connected by a million invisible threads.” The question of how one of them would go on having lost the other was one of the central questions Napolitano explored in the character of Edward.

Dear Edward is full of small kindnesses that help Edward get through the pain of daily life—the school principal who engages Edward to help him take care of his rare fern collection, neighbor Shay and her mother who accept Edward just as he is in all his brokenness, his aunt who watches General Hospital with him every afternoon, and his uncle who dedicates himself to collecting information about the crash and its victims, knowing that Edward will someday be interested, including bags of letters written to Edward by the loved ones of those lost in the crash.

Ultimately, this is a story about transcending horrific lost and creating a meaningful life in its aftermath. It would be not-at-all surprising to learn that film rights to this story have been sold. Read it now, and if you do, I hope you’ll be buoyed as I was by the persistence of hope and Edward’s tenacious journey to wholeness.

Lisa Gresham is the Collection Services Manager at Whatcom County Library System, which brings the power of sharing to rural Whatcom County. Visit https://www.wcls.org to place holds on library materials and learn about curbside holds pick up, in-person and other library services.