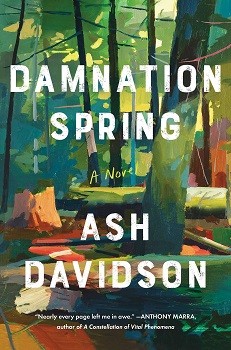 Set in the redwood forests of Northern California near the Oregon border, Ash Davidson’s impressive debut novel, Damnation Spring, tells the story of a logging family and community clinging to a vanishing way of life.

Davidson sets her story during the late 1970s, when the National Park Service is expanding, taking redwood groves out of reach of the timber industry, and the Environmental Protection Agency and Clean Water Act are more vigorously addressing the use of chemicals in the environment.

Living in Klamath, CA in the coastal redwood forests just south of the Oregon border, Rich Gunderson is a fourth-generation logger who has worked for the Sanderson Timber Company for 38 years. Rich is fiercely dedicated to his wife Colleen, 20 years his junior, and their 5-year old son, Chub. In hopes of a better life for Chub, without telling Colleen, Rich cashes in the family savings and takes on significant debt to purchase an old-growth redwood grove that he hopes to harvest and make millions.

But as summer turns to fall, dark clouds shadow Rich’s plans and threaten the well-being of his family. Rich struggles to make the land loan payments when work at Sanderson is curtailed as environmentalists flock to the community to protest the cutting of the redwoods, and there are increasingly volatile clashes between the loggers and protesters. Yurok Tribe members decry the destruction of their sacred homeland and the impact of logging on Klamath River salmon.

Colleen experiences her eighth miscarriage, and as the de facto midwife for their small community, is aware there have been other miscarriages as well as birth defects and stillbirths. When she encounters an old flame now doing environmental research in the area, a seed is planted that the miscarriages in the community may be related to the herbicide defoliant sprayed aerially by the timber company to clear brush in cutting areas for ease of access.

Could the herbicide also have contaminated Damnation Spring, from which Rich and Colleen draw their drinking water? Might it be causing Chub’s frequent nosebleeds? Although Rich is outwardly opposed to the protesters, he can’t deny the possibility that the herbicide is poisoning his family and soon they are using a purified water dispenser so they can stop drinking the water from the creek.

Tensions rise, both in Rich and Colleen’s marriage and within the community, as the town is pulled apart with the knowledge that their way of life is threatened—there are no more of the giant trees left to log, and the industry that provides their livelihoods may also be poisoning them.

Davidson admirably resists allowing her story to become an oversimplified tale of loggers vs. environmentalists; there are heroes and villains, victims and victimizers on all sides. The people who log the woods also live and recreate there and she draws into sharp focus the complex ways the needs of the planet and the needs of the market actually play out in people’s lives.

Damnation Spring joins other novels like Richard Powers’ The Overstory and Annie Proulx’s Barkskins in exploring and celebrating trees and forests and the impact humans have on them. It shares themes of family, forests and survival with the 2022 Whatcom Reads title, Greenwood by Michael Christie, both authors taking on the challenge of creating stories about “the hopeful, impossible task of growing toward the light.”