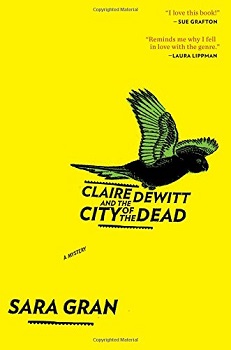 Claire DeWitt and the City of the Dead by Sara Gran

There’s something really fun and escapist about hard-boiled detective novels, and Sara Gran’s first Claire DeWitt mystery, Claire DeWitt and the City of the Dead, delivers in spades.

There’s a self-destructive protagonist who may or may not be a reliable narrator. It’s set in a gritty urban environment, this time New Orleans post-Katrina. It’s got lots of slangy dialogue, rampant drug use, and a smattering of sex and violence to keep things edgy.

It also has some quirks: Claire DeWitt’s adherence to the methods of an obscure French detective, for example. Claire herself is a sympathetic antihero, and little by little you get her backstory to understand what makes her believe she’s the world’s greatest (if unconventional) PI.

The story opens with a phone call. Claire’s been summoned back to the Big Easy to investigate a missing persons case. She meets Leon Salvatore, a scruffy 40-year-old whose uncle, Vic Willing, an assistant district attorney in the city prosecutor’s office, hasn’t been seen since the hurricane hit. Vic’s luxurious apartment in the French Quarter didn’t flood; there’s no sign of a break-in. He’s simply vanished. Claire takes the case.

From the first page we see the inner workings of Claire’s troubled mind. She has vivid dreams that serve as warnings. She quotes her mentor, Jacques Silette, and his legendary, only book, Détection, often. His teachings are cryptic and somewhat mystical: “You are alone in your search; no friend, no lover, no God from above will come to your aid. Your mysteries are yours alone.”  Claire lies.  Often. She trusts no one. She is alone.

Claire recognizes clues in unlikely places—on a business card stuck to a restaurant tab, with graffiti on a billboard, in a book about Mardi Gras Indians. She leaves no medicine cabinet un-searched, always pocketing the spare Vicodin for herself. She faces down gang members with a show of badassery and blatant disregard for her personal safety. Slowly, she begins to piece together a suspect, motive and a recounting of Vic’s last hours.

As Claire chips away at her latest case, flashbacks fill us in on her younger years in Brooklyn. Neglected by her eccentric parents, she roamed the city with her best friends Kelly and Tracy, poring over each issue of Cynthia Silverton Girl Detective and sleuthing out neighborhood mysteries. Then, one night when the girls were in their teens, reckless and unmoored, Tracy disappeared.

After searching fruitlessly for signs of her lost BFF, Claire took off, unable to come to terms with the situation. Years later, she’s relying on cocaine and booze to dull the pain and solving the odd case to compensate for the one for which she has no answers. As Claire’s beloved Silette intones, “The client already knows the solution to his mystery. But he doesn’t want to know.”

As she works her way to the truth, we find ourselves rooting for Claire—and hoping we’ll see more of her in future books. Fortunately, there are three in the series so far; go to our website to reserve them all.