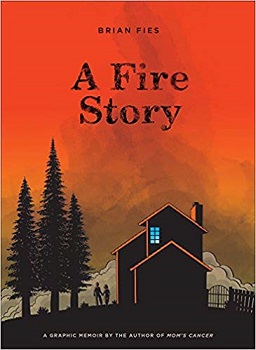 A Fire Story by Brian Fies

A recent report by the U.S. Climate Prediction Center and the National Interagency Fire Center calling for this year’s wildfire potential to be “above normal” in the Pacific Northwest may have Whatcom County residents already thinking about the threat of local fires and another summer of smoke-filled air. But what would it be like to lose everything you own to fire?

Writer and cartoonist Brian Fies explores exactly that in his new graphic memoir, A Fire Story. In October 2017, his home was completely destroyed by wildfires that raged through Northern California when unusually strong winds and hot, dry conditions ignited 11 major fires in an eight-county area, burning 8,900 structures and killing 44 people.

Brian and his wife, Karen, had little time to consider what to take with them when awakened at 1:30am and instructed to evacuate now, but the idea that there would be nothing left to return to was unthinkable. In an early illustration, Fies sketches “clothes I packed” and “stuff we grabbed,” the drawings a heartbreaking reminder their possessions could be reduced to this paltry list.

A few pages later is the drawing “things I will never see again,” a list that includes his grandmother’s Depression-era glass candy jar, Christmas ornaments made by their daughters, family photos, a lifetime of drawings and paintings—and simply ends “everything else.”

Several days pass before homeowners are officially allowed to return to sift through the charred remains. They are issued safety kits with Hazmat gear to protect them from the ashes, a chemical stew of potential poisons from the variety of burned materials. Their first find was some charred and broken holiday decorations, found near the surface because they had been stored in the garage rafters.

A neighbor, Larry, matter-of-factly reflected that everything from their homes was still there, “it just changed shape;” a sentiment that provided little comfort.

In a disengaged way, Fies finds the science behind the temperature at which things will burn oddly fascinating: concrete pops, flakes and crumbles at about 500 degrees Fahrenheit, glass light fixtures liquefy at about 1,400 degrees, and appliances and steel I-beams sag at about 2,600.

In the aftermath of the fire, Fies finds himself chasing down smoke smells in the surrounding countryside, usually just leading to a legal burn barrel or brush pile. He is aware he paid no attention to smoke smells prior to the fire, but calls it a “socially responsible form of PTSD.”

Advice about what he learned? At the risk of sounding cliché, “appreciate every day to its fullest” and “don’t sweat the small stuff.” Also, if ever asked to evacuate, assume you won’t ever see your house and belongings again and know what is in your insurance policy. And that even when everything is lost, home can still be the hope and promise of once again having a place that is shared with people you love and things that are hosts to your memories.

Beautifully written and illustrated, A Fire Story explores heartbreaking loss, stages of grief and, most importantly, the resilience that is invoked in families and communities hit by devastating tragedies such as wildfire.