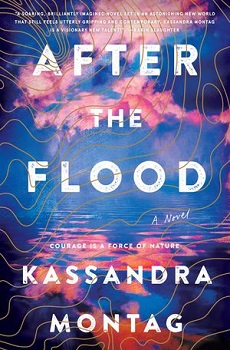 After the Flood by Kassandra Montag

Climate fiction, also known as “cli-fi” (referential to sci-fi), explores what life on earth will be like if climate change and global warming continue unchecked. Stories in this genre are important in that they can connect us emotionally with planetary changes occurring in our own backyards.

Kassandra Montag’s debut novel, After the Flood, is a recently published climate fiction title; set about a century in the future, rising waters from the One Hundred Year Flood have consumed much of the North American continent. Disease and calamity have vastly reduced life on earth, and the remaining people are banded together in mountaintop colonies or as small ship-borne communities.

As the devastating flood makes its way inland to Nebraska, Myra’s grandfather races to finish building the boat that will save them. Frustrated with Myra that she won’t leave without her grandfather, Myra’s husband, Jacob, flees with a departing neighbor, taking their daughter, Row, and leaving a pregnant Myra behind.

Pearl is born at sea and shortly after, grandfather dies, leaving Myra to fend for herself. Myra and Pearl survive by fishing and trading their catch for other necessities in far-between ports; trusting no one, Myra lives by her wits and intuition and goes to any length to keep Pearl safe.

Seven years pass and Myra has given up hope of finding Row, when a raider recognizes Row’s picture and reports that he saw her in a colony in Greenland. Myra resolves to find a way to make the dangerous Atlantic crossing and rescue Row, who would now be 13 years old, before she is sent by the colony to a breeding ship.

Myra’s boat is too small to make such a risky journey, but she is taken aboard a friendly ship whose inhabitants intend to find land in South America where they can start a community. What lengths will Myra go to to convince them to change course and sail north and east to Greenland before it is too late to save Row?

Although the plot and several of the characters occasionally lapse into being not quite believable, overall I found this to be quite a page-turner. The endless expanses of water covering vast abandoned cities capture the imagination, and fierce and resourceful Myra makes a compelling heroine. After the Flood is a great intro to climate fiction, and Kassandra Montag an emerging writer to watch.

To find more cli-fi titles, use the library catalog to search by List for “Climate Change.” You might try American War by Omar El Akkad; set in 2074, oil is outlawed, Louisiana is half underwater, and America is involved in a second Civil War. Another good option is The Marrow Thieves, by Cherie Dimaline, in which the world is ravaged by global warming and humans have lost the ability to dream, causing widespread madness; only North America’s indigenous people have retained their dreams and they are being captured and colonized to harvest them.

isa Gresham is the Collection Services Manager at the Whatcom County Library System. WCLS is celebrating its 75th year of sharing stories with the rural parts of Whatcom County. If you live outside the city limits of Bellingham, you can apply for a WCLS library card at http://www.wcls.org/get-a-library-card