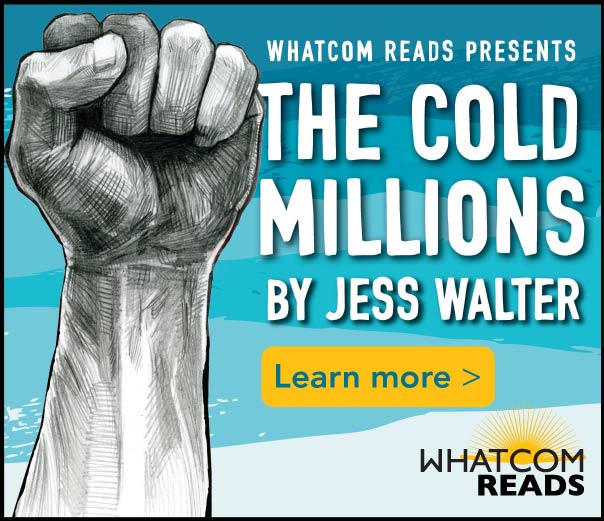 Winner of the Washington State Book Award and named to numerous “Best Book of the Year” lists, The Cold Millions follows the lives of orphaned brothers, Gig and Rye Dolan, as they struggle to realize their dreams of a better life. Spokane’s Free Speech Riots of 1909 form the backdrop of the novel and historical figures such as Elizabeth Gurley Flynn and Police Chief John T. Sullivan anchor the plot. As Gig and Rye careen through booze, flophouses, vaudeville, jails, and IWW protests, they find themselves caught between fighting for labor rights, looking out for each other, and securing personal safety. Author Anthony Doerr calls the book “a literary unicorn: a book about socioeconomic disparity that’s also a page-turner.”

The 2023 season marks 15 years of Whatcom READS programming. The region’s premier annual literary event, Whatcom READS celebrates reading, readers and strong communities through the shared experience of one book. Whatcom READS is presented by all the public and academic libraries in Bellingham and Whatcom County and community partner Village Books.

Borrow The Cold Millions as a book, eBook, or audiobook from the Bellingham Public Library or Whatcom County Library System. Or purchase a copy from Village Books, which donates 10 percent of each sale to Whatcom READS.

All programs are free except where noted. Pre-registration is required for some events. Find more information and register at whatcom.reads.org.

She Travelled Solo: Strong Women in the Early 20th Century

Inspired by her own 5,000-mile solo bicycle ride, Tessa Hulls researched little-known intrepid female adventurers. In this presentation, she demonstrates why female role models — such as characters in The Cold Millions — are vital in affecting social change.

Archivist Conor Casey, head of the Labor Archives of Washington, University of Washington Libraries Special Collections, will discuss the dynamic history of the labor and social justice movements of the Pacific Northwest though the frame of the collections of the Industrial Workers of the World (IWW). Also known as the Wobblies, the IWW is featured in The Cold Millions.

Vintage Vaudevillians
Echoing characters chronicled in The Cold Millions, this photographic exhibition highlights a dozen vaudeville acts that performed in Bellingham in the early 20th century.

General admission: $10. Free museum passes are available at the Bellingham Public Library. There is no admission fee during the Feb. 3 First Friday Art Walk.

Yes, the Wobblies are alive and well. An organizer for the Whatcom-Skagit Industrial Workers of the World will discuss the current activity of the union, its goals and its principles. Hear about IWW union activity in the Pacific Northwest and around North America today.

Join us for an interactive book discussion with co-editors Dr. Robin Zape-tah-hol-ah Minthorn of University of Washington-Tacoma, Dr. Anna Lees of Western Washington University and Dr. Cornel Pewewardy of Portland State University. Their book presents an innovative framework for promoting critical consciousness toward decolonization efforts among educators. The impacts of colonization and racism are part of The Cold Millions story.

Vaudeville and Vice in the Early 1900s

Kolby LaBree from Bellinghistory Tours with the Good Time Girls will discuss life on the vaudeville circuit and its ties to the underworld. She will share examples from The Cold Millions as well as stories from Bellingham history.

Free; donations to the Whatcom Museum are welcome.

Sponsored by the Whatcom Museum

Lynden Library Assistant Branch Manager Wendy McLeod was born and raised in Spokane. In this presentation, she shares the history of the city at the heart of The Cold Millions.

Songs of Protest with Jimmy Brite

Local writers read from their work selected for the 2023 Whatcom WRITES anthology. This year’s theme inspired by Jess Walter’s The Cold Millions is Between Fact and Fiction.

Submit original artwork inspired by The Cold Millions for display at the Allied Arts Gallery in Bellingham.

The author visits Whatcom County to discuss the book and his creative process.

Deming Library Manager Katrina Carabba and Public Services Assistant Erin Suda will co-host a conversation with the author about The Cold Millions and his other books. Audience questions are welcome.

Purchase $5 tickets online or at the event. Space is limited.

Art and Craft of Writing

Jess Walter shares his writing practice and tips to inspire your own writing.

An Evening with Jess Walter

Whatcom READS’ premiere event is at the beautiful Mount Baker Theatre. Following his presentation, Jess Walter will answer audience questions and sign books. The 2024 Whatcom READS title will be announced at the event.

A Conversation with Jess Walter

About Jess Walter:  A former National Book Award finalist and winner of the Edgar Allan Poe Award, Jess Walter is the highly regarded author of seven novels, two short story collections and one nonfiction book. His stories, essays and journalism have appeared in Harper’s, Esquire, The New York Times, The Washington Post and many other publications. Walter began his writing career in 1987 as a reporter for his hometown newspaper, The Spokesman-Review. He has also worked as a screenwriter and has taught graduate creative writing. In addition to winning the Washington State Book Award, Walter has twice won the Pacific Northwest Booksellers Award (for The Zero and We Live in Water) and was a finalist for the L.A. Times Book Prize (The Zero) and the PEN/USA Award in both fiction (The Zero) and nonfiction (Every Knee Shall Bow). His novel Beautiful Ruins spent more than a year on the bestseller list. Walter was also a finalist for the 1992 Pulitzer Prize as part of a team covering the shootout and standoff at Ruby Ridge in northern Idaho. He lives in Spokane with his family.