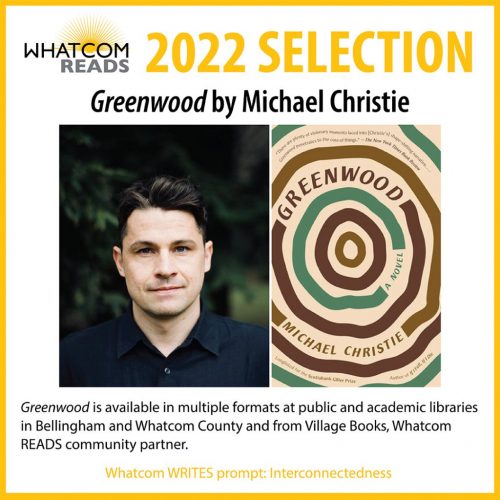 The novel Greenwood by Canadian author Michael Christie is the Whatcom READS 2022 book selection. The announcement was made at the close of a March 4 event featuring Esi Edugyan, author of the 2021 featured title, Washington Black.

Publisher Penguin Random House describes Greenwood as a magnificent generational saga and a “shining, intricate clock-work of a novel.” The publisher description continues: “The book charts a family’s rise and fall, its secrets and inherited crimes. And throughout, there are trees: a steady, silent pulse thrumming beneath author Michael Christie’s effortless sentences, working as a guiding metaphor for withering, weathering, and survival, for the hopeful, impossible task of growing toward the light.”

Christie is also the author of the highly regarded novel If I Fall, If I Die and the linked collection of stories, The Beggar’s Garden. His work has been nominated for the Scotiabank Giller Prize and Rogers Writers’ Trust Fiction Prize. His essays and book reviews appear in The New York Times, The Washington Post, and The Globe and Mail. A former carpenter and homeless-shelter worker, the author divides his time between Victoria and Galiano Island, British Columbia, where he lives with his wife and two sons in a timber-frame house that he built.

Community members may borrow Greenwood as a book, eBook, or eAudiobook from local libraries or purchase it from Village Books, who donates a percentage of each sale to Whatcom READS.

Leading up to the author events in March 2022, the Whatcom READS planning committee will work with community groups to create programs that explore themes from Greenwood. Inspired by the book, the 2022 Whatcom WRITES prompt is Interconnectedness. Visit Whatcom READS website, whatcomreads.org, and social media pages for updates and to get involved.

About Whatcom READS: Now in its 13th year, Whatcom READS is a countywide program that encourages everyone to read and discuss the same book. It is presented by all the public and academic libraries in Bellingham and Whatcom County and community partner Village Books. Learn more at whatcomreads.org.