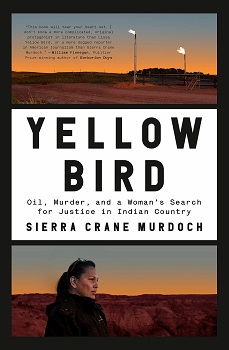 The recent media frenzy over the murder of 22-year-old Gabby Petito is drawing some disheartening comparisons to the attention paid to the alarming number of missing indigenous women across the United States. In South Dakota alone, there are currently 30 women who are missing. On some reservations, Native American women are murdered at a rate more than 10 times the national average.

Lissa Yellowbird-Chase, a member of the Three Affiliated Tribes in North Dakota, knows all about the stats. A former meth addict turned sleuth, Yellowbird-Chase has been doggedly pursuing murderers and seeking justice ever since she was released from prison herself in 2009. Her specialty is cold cases, which she throws herself into, paying little heed to her health, safety, or what people think about her.

You may have heard about her on the radio program This American Life or on NBC’s Dateline. Author Sierra Crane Murdoch spent multiple years getting to know Yellowbird-Chase in all her complexity, and presents a thoroughly researched and sensitive account of Yellowbird-Chase’s early cases. The book, Yellow Bird: Oil, Murder, and a Woman’s Search for Justice in Indian County, was honored as a finalist for the Pulitzer Prize, and can be appreciated by those who enjoy powerful, narrative nonfiction as well as true-crime enthusiasts.

Yellowbird-Chase is a fascinating force of nature. Throughout her life, she suffered multiple traumas, toxic relationships, drug and alcohol addiction, and homelessness. Her kids suffered too, especially in 2006 when Yellowbird-Chase began a 10-year sentence in state prison for intent to distribute methamphetamine. After serving nearly three years, she emerged, sober, wanting to reconnect with her children and provide a steady home. But a quiet life proved to be elusive.

When a 29-year old white contractor named Kristopher Clarke went missing from the Fort Berthold Reservation in 2012, Yellowbird-Chase felt compelled to investigate. Soon, she became obsessed, chasing down leads, interviewing possible witnesses, staying up until all hours piecing together clues. She forged an uncomfortable friendship with Clarke’s estranged mother, made enemies of the people she believes were involved in Clarke’s disappearance, and discovered a rotten core lurking beneath the surface of her small community.

Murdoch, a journalist, details the effect the Bakken oil boom has had on North Dakota and specifically on the Mandan Hidatsa Arikara Nation—the tremendous influx of wealth, outside interests, and lawlessness that pervades Yellowbird-Crane’s reservation. Murdoch shows us the historic and ongoing tragedies of exploitation—of both natural resources and people. She also deftly captures the essence of Yellowbird-Chase, at times scattered and brusque, at others laser-focused, manipulative—even charming. Murdoch recognizes that her own white privilege is problematic in sharing Yellowbird-Chase’s story. Her bona fides: her long tenure reporting on the American West and specifically issues in Indian Country. Murdoch was a contributing editor for High Country News.

Yellowbird-Chase does not approach cases in a linear fashion, and neither does Murdoch in telling her story. Those wishing for a straightforward narrative of Clarke’s murder and the subsequent path to justice may be disappointed. But others willing to dig in to the book will come to appreciate the complexity and sadness of the work to be done, and the strength and unique dedication that Yellowbird-Chase brings to this terrible endeavor.