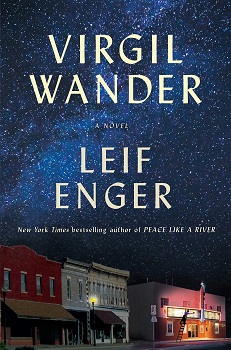 Leif Enger’s first book in a decade (So Brave, Young, and Handsome was published in 2008) is a gentle, charming antidote to all that ails us as a society these days.

The title character, Virgil Wander, is the unassuming sole proprietor of a rundown independent movie theater in a struggling Minnesota town. Virgil’s on autopilot, lonely and at an impasse in his life, when a slick road in a sudden snowstorm lands him 40 feet below the surface of Lake Superior.

Rescued by a local junkman and diagnosed with mild traumatic brain injury, Virgil suffers from terrible headaches, a loss of balance and a noticeable lack of adjectives. His Finnish neurologist assures him his language will return in time, but it’s clear to Virgil that something essential about him has changed, even if he can’t articulate it.

At first Virgil’s friends, like Beeman, who publishes the weekly newspaper, don’t notice Virgil’s transformation. Beeman drops Virgil off at his home above the Empress Theater where he’s lived for the past 20 years, unaware that to Virgil, the apartment seems to belong to a stranger.

Virgil sees the whole town of Greenstone with new eyes: the litter-strewn parking lot of the Voyageur Motel, the decrepit taconite factory now overgrown by saplings, the downtown main street with its air of defeat.

Virgil is looking at people in a new way, too. He meets a mysterious older man flying kites by the waterfront and, after discovering that Rune has nowhere to stay, offers him his spare room. Ann, Virgil’s irritating colleague at his day job at the Greenstone City Hall, no longer bothers him. He talks her into going with him to ask the town’s infamous millionaire, Adam Leer, to participate in an ill-conceived civic event. Where Virgil would have once felt cowed and deferential, he now notes Leer’s menacing charisma.

Virgil’s days, once quiet and mundane, start to build in intensity. The new Virgil speaks plainly to his longtime crush, only to find his feelings are reciprocated. He takes steps to repatriate the contraband reels of classic films that had been hidden in a closet at the Empress. He keeps a watchful, caring eye out for a 10-year-old boy who’s bent on catching the massive sturgeon he believes is responsible for his father’s death. And he works to pull together Greenstone’s Hard Luck Days, wondering if in fact the town’s luck (and his) is turning.

Despite the quirky characters and fantastic situations, Enger keeps the plot line believable. Virgil comes across as someone straight out of the Prairie Home Companion—honest, moderate, modest. His friendships are real, his decency is admirable, and his book—this book—is intelligent, amusing and well worth the several delightful hours it takes to read it.

If you’ve never read Enger’s debut novel, Peace Like a River, now’s your chance. It’s the tale of an 11-year-old, cowboy-obsessed boy named Reuben Land who goes on a cross-country journey to find his older brother—who’s trying to outrun a murder charge. The beautiful language, the time period, and the unforgettable characters will remind you of To Kill a Mockingbird.