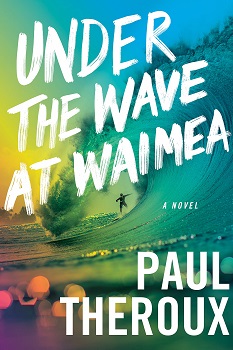 Under the Wave at Waimea by Paul Theroux

Known primarily as a travel writer, Paul Theroux’s latest novel definitely incorporates his skill for deeply observing and writing about different locales. Reading Under the Wave at Waimea felt, at times, as if I’d been transported to Hawaii, complete with the sound of the surf and warm sand beaches, making this a perfect summer read.

Theroux has lived on the North Shore of Oahu near Waimea Bay for decades and, while not a surfer, his familiarity with surfing and surfer culture results in an immensely compelling character in aging surfer Joe Sharkey.

Sharkey, a barely literate high school dropout living off sponsorships and an inheritance from his mother, lives to surf. A brief stint as a lifeguard is the only job he ever held. His status as a surf celebrity gained him access to the best parties, as well as invitations to surf big waves in every corner of the planet. Now in his 60s, Sharkey still surfs, but sponsors are looking elsewhere and he is “just another leathery geezer in flip-flops” to new up-and-coming surfers.

Heading home one night after one too many drinks and too much pakalolo smoke, insisting to his girlfriend, Olive, that he can drive, Sharkey hits and kills a homeless man on a bicycle on a dark, rain-drenched section of road. Because of his surf celebrity status, the police look the other way regarding Sharkey being intoxicated and the homeless man who was killed remains an unnamed body in the morgue.

Sharkey tries to downplay the accident and his culpability (“I hit a drunk homeless guy”), but Olive is deeply troubled and presses Sharkey to come to terms (“You killed a man”). Things begin to go wrong for Sharkey after the accident and he slowly unravels, the first third of the book ending with Sharkey’s near-drowning while surfing in Waimea.

The middle chapters delve into Sharkey’s childhood—his domineering but often absent Special Forces military father, emotionally needy mother, and the teasing and bullying he endured as a haole outsider growing up as one of few whites at his school. Discovering that he was fearless in the water and skilled on a board meant status with the locals, girlfriends, access to pakalolo, and never-before-experienced freedom and confidence.

Theroux is known for including real-life characters in his books, sometimes to the point of creating controversy. In Under the Wave at Waimea, Sharkey is befriended by larger-than-life American journalist and author Hunter S. Thompson, known for his debauchery, who in real life visited Hawaii every year and loved to watch surfing. Theroux knew Thompson and said that he basically gave Sharkey his experiences with Hunter, giving this fictional friendship an incredibly authentic feel.

The final section of the book takes us back to the present and Olive’s insistence that they discover the identity of the man Sharkey killed, an investigation that uncovers surprising secrets, taking them as far as Arkansas on the mainland, as well as to places in Oahu that many people who live there avoid. Through the process of accepting responsibility for the death of the man, Sharkey reconnects with his vitality and can once again take refuge in the waves that sustain him.

Yes, Under the Wave at Waimea is about surfing, and anyone interested in surfing will love this book, but the appeal goes far beyond that. At its core, this is a novel about privilege, relationships, mortality and learning to ride and survive the “big waves” that occur in all of our lives.

Lisa Gresham is the Collection Services Manager at Whatcom County Library System, which brings the power of sharing to rural Whatcom County.