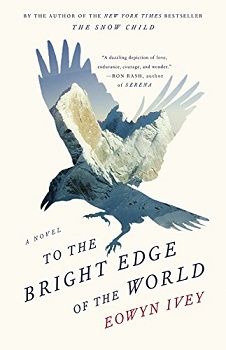 To the Bright Edge of the World by Eowyn Ivey

If you’re looking for an engrossing novel to carry you beyond any holiday chaos and onward through the dark days of winter, be sure to pick up a copy of the 2020 Whatcom READS selection To the Bright Edge of the World by Eowyn Ivey.

Like Ivey’s Pulitzer Prize-nominated debut The Snow Child, it’s set in remote Alaska, only a generation earlier, in 1885. Colonel Allen Forrester is charged with leading an expedition up the icy Wolverine River across Alaska Territory, to the edge of the known world.

As the hardships and perils mount, Allen carefully chronicles his experiences in his journal, fearful that the diary may be all that remains for his beloved wife Sophie should he succumb. Guided by natives who have intimate knowledge of the land but a healthy suspicion of white explorers and a heady dose of superstition, Allen attempts to map the Alaska interior even as hunger, sickness and sleeplessness start to erode his grip on reality.

Back at the Vancouver Barracks in Washington Territory, a spirited Sophie adjusts to her blossoming pregnancy while eagerly anticipating word from her husband. Not content to bide her time while Allen is out adventuring, Sophie explores the emerging art of photography. As the months drag on, Sophie begins to sense a strong, mystical force at play. A raven appears, ominous and foreboding. A silver hair comb goes missing. Sophie dreams of burning wood and darkness. Her loneliness becomes palpable.

Ivey deftly moves from past to present and back again, supplementing the narrative with letters, official reports, photographs, journal entries and the like. She frames the historical tale, roughly based on Lieutenant Henry T. Allen’s exploration of the Copper River, with correspondence between Walt, a descendant of Colonel Forester, and Josh, an Alaskan museum curator. She weaves in Native American folklore and vivid descriptions of the natural world.

Readers who can tolerate a nonlinear approach and a dash of magical realism will be richly rewarded. The scenes of Allen’s trek are terrifying and suspenseful, the portrayal of the forward-thinking Sophie is inspiring, and the descriptions of Alaska’s wild and breathtaking scenery will have you yearning to spend time there yourself.

Ivey grew up in Alaska, studied journalism and creative writing at Western Washington University, and lives in Alaska today with her husband and two daughters. She’ll visit Whatcom County in March 2020.

The Whatcom READS committee has lined up a robust schedule of events to supplement the author’s presentations, based on themes from the book. There will be talks about outdoor adventures and Native American lore, early photographic technology, birds, cartography, and feminism. Go to http://www.whatcomreads.org/events for details.

Christine Perkins is the executive director of the Whatcom County Library System (WCLS) and treasurer for Whatcom READS, the countywide reading program now in its 12th year.