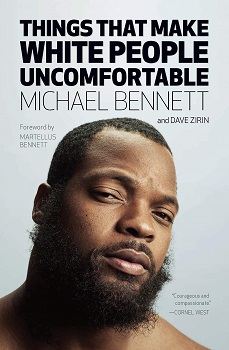 The Super Bowl may be over and the New England Patriots’ sixth championship win noted in the record books, but there’s plenty about professional football and racism in the United States to make white people ill at ease, and who better than Michael Bennett to spell it out?

He does just that in Things That Make White People Uncomfortable. With his typical direct, take-no-prisoners delivery, the former Seahawk lets you know what’s on his mind—and it’s not just football.

Bennett begins with the Seahawks’ first preseason game of 2017, when, mindful of the recent violent neo-Nazi protests in Charlottesville, Virginia, he decided to sit during the playing of the national anthem. “The fact that it made people angry, uncomfortable, and even hateful was proof that I was right to make a stand and take a seat,” he says.

Bennett has high praise for Colin Kaepernick, “one of the best fighters for justice and equality in sports history,” as well has his Seahawk teammates, who chose to sit out the anthem on Sept. 24, 2017 as a unified symbol of their commitment to work toward freedom and equality. He credits their ability to share their differing viewpoints respectfully and to be vulnerable with one another as a reason they are so successful as a team (and admirable as people).

Though Bennett had a successful college football career at Texas A & M, he calls B.S. on the NCAA and the media’s whitewashed portrayal of the college game as somehow “post-racial” because white fans cheer for majority-black teams. The players make no money, he points out, and are just there to provide entertainment. “Brainwashing athletes to play in the NCAA is an essential part of the NFL pipeline.”

Bennett asks some tough questions and presents hard data about professional football, where white businessmen are “owners” and the players are…property? He reviews recent studies of CTE (chronic traumatic encephalopathy) and the physical toll football takes on its players. He also acknowledges the sport’s function as “soap opera for men.”

He’s not ungrateful, however, for the paycheck, and the opportunities his NFL position have brought him. Like many of his teammates and opponents, Bennett has a charitable foundation. His focus is on underserved children, STEM programming, and hunger issues. Bennett has three daughters and takes the role of feminist seriously. He’s also a proponent of intersectionality as the best hope for change.

Bennett addresses the Black Lives Matter movement and the importance of standing up for what you believe. He honors all the athletes who have used their platform on the international stage to bring attention to important issues and ends with a pledge to advocate at a grassroots level for progressive change in America.

Bennett shares writing credits with Dave Zirin, sports editor for the Nation, who is likely responsible for organizing Bennett’s thoughts into a cohesive narrative. He has mixed results. Just when the prose starts to meander, however, Bennett delivers a zinger that is clearly his own, and his insights are spot-on and worth pondering.

He also shares his sense of humor and some inside intel on the inspiration for his infamous “sack dance” (he calls it “two angels dance while chocolate is coming from the heavens on a nice Sunday morning”).

Whether you’re a diehard 12 or someone who prefers a good hike instead of spending some hours watching grown men plow into each other for sport, Bennett’s book is an accessible and thought-provoking look at racism, injustice and the power of protest.

Christine Perkins is the Executive Director of the Whatcom County Library System.