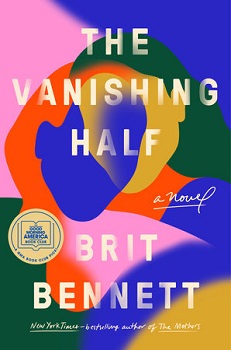 The Vanishing Half by Brit Bennett

When writing her new novel, The Vanishing Half, Brit Bennett never dreamed its subject matter would be so timely at publication.

The book opens in 1968 against the backdrop of Martin Luther King Jr.’s assassination and the civil unrest that followed, and is a brilliant exploration of race, gender and identity.

Twins Desiree and Stella Vignes grow up in Mallard, Louisiana, a fictional town in the Jim Crow South established by their great-great-great-grandfather as a place that celebrates light-skinned Blacks.

Alphonse Decuir envisioned marriages that would encourage ever-lighter-skinned progeny, like “a cup of coffee steadily diluted with cream. A more perfect Negro. Each generation lighter than the one before.” Desiree and Stella, with their “creamy skin, hazel eyes, wavy hair,” would have made their ancestor, the town founder, proud.

Lighter skin isn’t enough, however, to protect the twin’s daddy from being accused of writing a nasty note to a white woman (though he couldn’t write) and lynched by a gang of white men. Nor does it protect their mother from having to work cleaning wealthy white people’s homes while trying to make ends meet after the death of her husband.

Desiree and Stella eventually make a secret plan to leave Mallard and start new lives in New Orleans, two hours away. But both are haunted by their father’s murder and respond to it in different life-changing ways. Desiree marries the blackest man she can find while Stella experiments with passing as white, eventually getting hired as a white secretary, marrying and leaving Desiree and her Mallard roots behind to live as a white person.

Both women have daughters who take after their fathers. Desiree’s daughter, Jude, as described by the owner of Lou’s Egg House to his barely awake morning customers, is “blueblack, like she flown direct from Africa.” Kennedy, Stella’s daughter, is blond, fair-skinned and spoiled. Kennedy knows nothing about her mother’s past or the fact that neither she nor her mother are as white as they appear. Things get very interesting when a chance meeting brings these two cousins together.

A supporting cast of memorable male characters includes Early Jones, an old flame that reignites in a nuanced and gentle relationship when Desiree returns to Mallard. Jude has a loving, tender relationship with Reese, a transsexual who provides another interesting perspective on passing. Jude and Reese find a stalwart friend in Barry, a high school chemistry teacher by day who several nights a month performs in a club as Bianca.

Stella barters her past for the safety, stability and privilege of whiteness. But this act of self-creation is also an act of self-destruction, and the costs of living this lie compile to the point where, even for the reader, they feel unbearable.

Bennett deftly uses Stella’s experiment in passing as white to explore ways that passing both exposes and strengthens the idea of race. “If you can move between these categories because you decide that you will, what does it actually mean that we have systems that are built on reinforcing those categories?”

The Vanishing Half is both an immensely readable story about family and belonging, and a provocative and timely exposure of issues of racial identity and privilege in America, past and present.

Lisa Gresham is the Collection Services Manager at the Whatcom County Library System. Visit wcls.org to place holds and find out about curbside hold pickup services; or give us a call at 360-305-3600 and we’ll happily place holds for you.