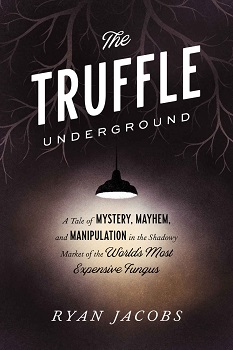 The Truffle Underground: A Tale of Mystery, Mayhem, and Manipulation in the Shadowy Market of the World’s Most Expensive Fungus by Ryan McMahon Jacobs

Authors and publishers have learned that if you add a lengthy, intriguing subtitle to your book, you increase the chances of someone picking it up. Investigative journalist Ryan Jacobs put this into practice with his first full-length work, The Truffle Underground: A Tale of Mystery, Mayhem, and Manipulations in the Shadowy Market of the World’s Most Expensive Fungus.

With a title that dramatic, it’s important to deliver, and Jacobs does, crafting a fast-paced, fascinating micro-history that will take you out of your quarantine tedium.

Jacobs was covering international crime for The Atlantic when he took note of a headline in Der Spiegel, “Mushroom Thieves at Large in German Forests,” and started asking around. While his contact seemed to think the attack of a forestry worker by four shady porcini foragers was a one-off, he did tip Jacobs off to a bigger story—the dark underworld of the truffle industry.

Even if you’ve never had so much of a whiff of a truffle, much less a nibble, Jacobs will make you want to experience them. He conveys their intoxicating allure, their rarity, their ephemeral nature. He takes time to explain how they grow, how humans first discovered them and ultimately learned to cultivate them, and how the truffle business evolved into a multimillion-dollar industry.

Like other food-focused micro-histories—think Salt and Cod by Mark Kurlansky, Banana by Dan Koeppel, and Milk by Anne Mendelson—Jacobs piles on vivid details using evocative language.

Where The Truffle Underground goes a step further is by introducing the crime angle—bandits sneaking into oak forests and poisoning prized truffle hounds, truffle hunters passing off inferior product, arson, theft, tax fraud and even murder.

By the end, Jacobs unearths a vast conspiracy to defraud unwitting consumers by selling more “genuine” Italian white truffles than the country can possibly produce each year.

The world of truffles is filled with colorful characters and Jacobs interviews many of them. There’s gendarme Andre Gaugier, who patrols a region of 2500 French truffle growers, and Laurent Rambaud, a farmer who was charged with murder after he shot and killed an intruder to his truffle grove.

Jacobs also checks in with Sandrino Romanelli, a white truffle trader who counts Robert De Niro as a client. He introduces us to Gian Piero Vivalda, a Michelin-star restaurateur whose hard work and good luck was sorely tested in 2014 when four robbers attacked him in his home and made off with eight kilograms of fresh Piedmont truffles and, for good measure, several bottles of Barolo.

Jacobs ends with an interview with Olga Urbani, the over-the-top heiress to the Urbani Tartufi fortune. He describes her customary fur coat, her regal bearing, her questionable ethics and her unwavering passion for truffles. As she shaves sliver after sliver of fragrant white truffle over a perfect plate of fresh tagliatelle, Jacobs experiences “the kind of culinary pleasure that rips you away from concerns and anxieties. It made me forget where I was.”

We could all use some truffles right about now.

Christine Perkins is the executive director of the Whatcom County Library System (WCLS). WCLS brings the power of sharing to Whatcom County, including a wide variety of online resources at https://www.wcls.org/info. For those who don’t have access to the internet or would like to speak to library staff one-on-one, WCLS is open for phone calls from 1pm-5pm daily at (360-305-3600) or by calling a WCLS branch directly.