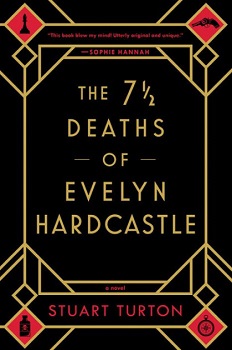 Escapism seems to be in order these days, and sometimes a twisty mystery is just the ticket for engrossing distraction. Stuart Turton’s inventive 2018 whodunnit, The Seven and a Half Deaths of Evelyn Hardcastle, is more like a who-what-when-where-how-dunnit.

It’s been billed as “Groundhog Day meets Agatha Christie,” an unexpected but appropriate pairing. There’s intricate plotting for Kate Atkinson fans, and elements of Anthony Horowitz’s modern take on Dame Agatha. Best of all, it keeps you guessing until the end, which is always an important characteristic of a successful mystery.

The scene opens in a forest in the British countryside. Aiden Bishop is lost and bleeding, with no memory of who he is or how he got there. Then he witnesses what he believes is a murder. When he finally emerges from the woods, he makes his way toward Blackheath House, a down-at-the-heels estate where he desperately tries to convince people to search for the victim’s body.

The other guests are strangely not very alarmed—they recognize him as Sebastian Bell, one of the many people invited to a gala ball hosted by the Hardcastle family to commemorate the death of their son Thomas, who was murdered there years before.

Aiden struggles to piece together what has happened, but when morning comes he discovers he’s now in a different guest’s body—and he’s living the entire day again from that person’s perspective. He meets Evelyn Hardcastle, newly arrived from Paris, and learns from a masked man that Evelyn is destined to die the night of the ball at precisely 11pm. Aiden needs to solve the mystery of Evelyn’s death—and he has only eight chances to do it, as each time he falls asleep he wakes up in another person’s body, then witnesses her murder again, in a vicious loop.

If that sounds confusing, it is, but stick with it. There’s a time travel element, with one character placing clues for the next character, and changing their behavior one time in a way that impacts the next. There are other characters similarly caught in a time trap, racing to be the first to solve the puzzle and escape. There are clues aplenty and some interesting explorations of the various characters (among them, a butler, a police officer and a socialite).

Ultimately it’s a story about Aiden’s struggle to be the sort of man he aspires to be but knows deep down he hasn’t been.

This book is clever, convincing, and cohesive. It’s hard to believe it’s Turton’s first novel. Fortunately, his newest book, The Devil and the Dark Water, is set to come out later this year. Thinking ahead, your libraries already have it on order.