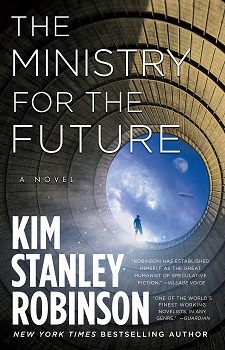 The Ministry for the Future by Kim Stanley Robinson

This year’s Whatcom READS title, “Greenwood” by Michael Christie, imagines the near future, where eco-tourists pay top dollar to experience one of the last surviving old growth forests. While “Greenwood” is not overtly science fiction, the effects of climate change are certainly a major element in the story. That’s why the Whatcom READS lineup of supporting events includes several that address climate issues.

Kim Stanley Robinson’s novel “The Ministry for the Future” is an excellent example of “cli-fi,” written by a much-heralded and respected science fiction author at the top of his craft. Like Robinson’s previous works, which include the “Mars Trilogy,” “The Years of Rice and Salt,” and “Antarctica,” “The Ministry for the Future” examines the intersection between nature and culture. Robinson asks, “how will humanity survive the climate crisis?”

Robinson invents a global ministry, authorized under the Paris Agreement and established in Zurich after COP29. A team of international experts staffs the ministry, looking at any and all ways to fend off the devastating effects of climate change and save humanity. There are economists looking at alternatives to carbon-based capitalism, conservationists tracking species extinction, and lawyers litigating challenges to climate-friendly policies. There’s a team of glaciologists sent to Antarctica to investigate ways to pump water from beneath the ice cap to rebuild the glaciers and fend off sea level rise. The Ministry for the Future is a bustling hive powered by realists taking action.  Kim Stanley Robinson’s novel “The Ministry for the Future” is an excellent example of “cli-fi,” written by a much-heralded and respected science fiction author at the top of his craft.

Robinson relates the story in eyewitness accounts by diverse narrators. The changing viewpoints keep the plot from getting bogged down and heavy. As different characters review the events that have come before, Robinson gives readers another chance for the ideas to sink in. This is key, as the ideas are plentiful, and complex, and worth pondering. Some readers may find his approach scattershot, or perhaps too basic — yet for the average person filled with a looming sense of dread about the future but no concrete plan of what to do about it, this book is full of promising concepts worth further research.

At the helm of the Ministry is Mary Murphy, a 42-year-old Irish labor attorney. It is hard to imagine a more compassionate but pragmatic person to take on this important work. She has no illusions that her ministry has any teeth — it has no authority, no enforcement and a limited budget.

Yet she doggedly perseveres, making difficult decisions and encouraging everyone to “go long.” “You can short civilization if you want,” she says. “Not a bad bet really. But no one to pay you if you win. Whereas if you go long on civilization, and civilization (therefore) survives, you win big. So the smart move is to go long.”

This is Robinson’s prevailing viewpoint — a realistic read of the negative aspects of human behavior but also an optimism that humans can, and will, see the light.

Christine Perkins is the executive director of the Whatcom County Library System (WCLS). She is also the Treasurer of Whatcom READS and has been part of the planning committee since Whatcom READS began in 2009. WCLS brings the power of sharing to rural Whatcom County, including a wide selection of online content  at www.wcls.org/info. Your public libraries are an essential “green” resource — reduce, reuse, read!