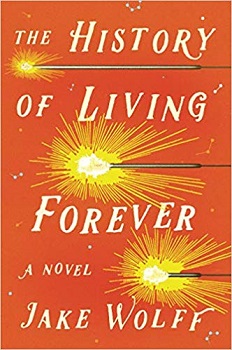 The History of Living Forever by Jake Wolff

And then, contrary to the title of Jake Wolff’s debut novel, The History of Living Forever, the teacher is found dead the day before Conrad’s senior year of high school begins.

Conrad is, of course, devastated. The death is being investigated as a suicide, and although prone to occasional melancholy, anger and migraines, his teacher, Sammy Tampari, made no indication he was deeply troubled. Conrad wonders, “Was it me?” He is alone in his suffering, as the affair was (for obvious reasons) something he hid from his few friends and family.

When a mysterious package arrives, Conrad finds that Sammy bequeathed him a lifetime worth of journals, containing not only stories from Sammy’s life, but arcane recipes and access to a storage locker filled with a bewildering array of scientific equipment.

Through the journals, Sammy’s secret life is revealed, and Conrad learns that the existential question, “What’s wrong with me?” plagued Sammy throughout his life and led to an obsession with the mythic elixir of life, the key to immortality.

About Sammy’s fascination with immortality, Wolff writes, “Death was like an obligation, a dentist appointment—it was a thing you sometimes wanted to put off and sometimes wanted to just get over with.” The elixir of life represented “hope of a cure for the incurable condition of his mind.”

Conrad realizes his teacher was not only a brilliant chemist, but an alchemist. The journals are peppered with recipes that appear to be updated and amended based on actual testing. But the final recipe ends inconclusively with the question, “What’s missing?”

Did Sammy die testing this final recipe? And, if so, what is missing? If Conrad can figure this out, he may be able to administer Sammy’s elixir to his father, who is dying of liver failure. The necessary ingredients are obscure, however, taking readers from Conrad’s home in Maine to Romania and Easter Island and requiring the help of an unforgettable cast of characters, including unreliable drug kingpins, Sammy’s former wife, Catherine, and his former lover, Sadiq.

To better understand the mindset of his characters, Wolff confesses in an interview that he did sample various products claiming to be elixirs of life, ingesting a potion from an Australian alchemist, as well as elixirs made of snail mucous, gold nanoparticles, deer velvet, and a pill made from caterpillar fungus. You have to admire his commitment to authenticity.

If you enjoyed last year’s bestseller, The Immortalists, by Chloe Benjamin, The History of Living Forever is similar in its inquiry about immortality, the bonds of love and family, and as a story told through multiple points of view.

Given the option, would you want to live forever? To what lengths would you go to keep a loved one alive? This ambitious debut novel will keep you lingering over these questions long after the final page.

Lisa Gresham is the Collection Services Manager at the Whatcom County Library System. WCLS is celebrating its 75th year of sharing stories with the rural parts of Whatcom County. If you live outside the city limits of Bellingham, you can apply for a WCLS library card at https://www.wcls.org/get-a-library-card