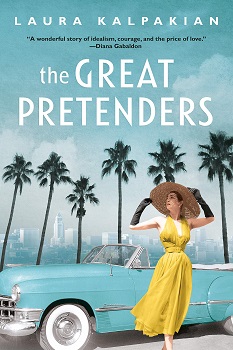 The Great Pretenders by Laura Kalpakian

Set in Hollywood in the 1950s, it’s got the right blend of glitz and pop culture so you can while away a sun-filled Saturday, allowing yourself to recuperate after your recreational endeavors or take a break from your gardening toil.

Better still, it addresses social and political issues of that era—the blacklisting of communist sympathizers in the film industry, and discrimination against African-Americans and mixed-race couples—which elevates this book from breezy fluff to interesting, character-driven historical fiction.

When Roxanne Granville’s beloved grandmother Julia Greene dies, bequeathing her with a sizable inheritance, Roxanne defies convention and refuses to return to college. Her grandfather Leon Greene, who, with Julia, raised Roxanne from childhood, is gravely concerned. As the deeply conservative scion of Empire Pictures, he wants the best for his granddaughter.

But Leon’s part of the problem, as his scandalous affair with starlet Denise Dell, 40 years younger than himself, broke Julia’s heart. Roxanne is not in a forgiving frame of mind. She refuses to move back in with Leon while Denise is living under the same roof. Roxanne charges off to make a name for herself as an agent, only to discover she’s been given a job primarily so her boss can sponge off her Empire Pictures connections.

It’s no surprise that Roxanne’s workdays are mostly drudgery and serving coffee—and fending off the unwanted advances of her lecherous supervisor. Outraged, Roxanne vows to start her own agency, commuting between a beachside cottage in Malibu and a small office in the Los Angeles suburbs.

It’s a hard slog, with Roxanne nearly throwing in the towel, until she gets a desperate plea for help from a blacklisted screenwriter. He asks Roxanne to find another writer willing to pass off his work as his own and sell it to a movie studio. The script is good—it sells—and suddenly Roxanne’s business is taking off. Her success remains tenuous however, as the constant fear of getting caught in a web of lies takes its toll.

Roxanne’s world is not all work; she lets loose from time to time with her childhood friend Jonathan, a bon vivant actor. One night, Jonathan and some pals take Roxanne to the Comet Club, an African-American jazz joint.  Roxanne meets Terrence Dexter, a handsome, earnest black journalist who writes for an NAACP newspaper. Their connection is quick to build and their passion insatiable, though they take care to hide it.  Before long, Roxanne’s work life and personal life become so fraught it’s evident there will be a dramatic reckoning.

While the plot of The Great Pretenders veers toward melodrama, readers who enjoy Roxanne’s spunk and tenacity will be forgiving. With cameos from the likes of Rock Hudson and Hedda Hopper, and historical details about the House Un-American Activities Committee and the impact of television on the film industry, there’s much to keep the pages turning.

As Julia reminds Roxanne, “glamour is nothing more than knowing how to talk fast…and leave a shimmering wake,” and The Great Pretenders does just that.

Christine Perkins is the executive director of the Whatcom County Library System (WCLS). WCLS is celebrating its 75th year of sharing stories with the rural parts of Whatcom County. If you live outside the city limits of Bellingham, you can apply for a WCLS library card at https://www.wcls.org/get-a-card.