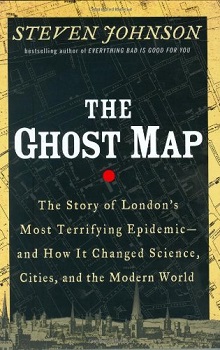 The Ghost Map: The Story of London’s Most Terrifying Epidemic—and How it Changed Science, Cities and the Modern World

With reports of COVID-19 dominating the news cycle and the worldwide run on face masks and antibacterial hand sanitizer, reading a book about a deadly cholera epidemic in London might not be the kind of escapist antidote readers may be craving, but it is informative and enlightening nonetheless.

In The Ghost Map: The Story of London’s Most Terrifying Epidemic—and How it Changed Science, Cities and the Modern World, historian Steven Johnson researched the 1854 Broad Street cholera outbreak, looking at the emerging field of modern epidemiology, when scientists wrote letters and met face-to-face rather than share their research over the internet and via 24-hour news cycles.

Johnson focuses on the efforts of physician John Snow and Reverend Henry Whitehead to map the spread of the disease and find its source. Both men had to battle the prevailing viewpoint that cholera was transmitted through particles in the air, or “miasmata.”

Two prior outbreaks, in 1832 and 1849, were responsible for the deaths of 14,137 Londoners, so when 127 people near Broad Street died in a three-day period at the beginning of September 1854, people panicked. In one week, 75 percent of the residents of the area had fled and 10 days in 500 people had died. The mortality rate was 12.8 percent. Florence Nightingale herself was called in to Middlesex Hospital to administer aid, primarily to “fallen women” who seemed to be particularly vulnerable.

Johnson portrays the frantic initial days of the outbreak and Dr. Snow’s efforts to pinpoint the source. Although the role of the contaminated Broad Street pump is well-documented today, Johnson builds suspense as Snow and Whitehead interview families, piecing together the fact that 61 of the newly deceased regularly drank water from the Broad Street pump. Some families deliberately fetched water from that pump, despite living in closer proximity to other pumps.

After meeting with the Board of Guardians for St. James Parish, Snow convinced them to remove the pump handle, effectively ending the outbreak. Sadly, once the epidemic was safely past, the pump handle was replaced, showing that the government officials did not truly accept Snow’s hypothesis linking fecal contamination to the drinking water.

While Johnson effectively chronicles the events of the outbreak and Snow and Whitehead’s roles in investigating it, he loses steam when trying to draw more conclusions about the long-term effects on city planning, sanitation and water treatment.

He unsuccessfully tries to link the Broad Street epidemic to future urbanization patterns. He also gets bogged down analyzing the battle between established scientific paradigms (miasmatism) versus the emergence of germ theory. He does however spend significant time explaining a major dilemma of people living in close quarters in modern cities—how to accommodate all the human waste that accumulates daily?

Johnson provides fascinating (if somewhat disgusting) details about living conditions in the London slums during this time period—filled with cesspools and populated by night-soil men, mudlarks and bone-pickers. Readers will be grateful for modern plumbing.

The Ghost Map is available from your local public libraries as a book, eBook, and eAudiobook. There is also a book club kit for group discussions. Be sure to visit the John Snow Archive and Research Companion at johnsnow.matrix.msu.edu/cws.php to supplement your reading with links to Snow’s maps and other research.

Christine Perkins is the executive director of the Whatcom County Library System (WCLS). If you’re not feeling well, she recommends staying home and downloading some library eBooks at https://www.wcls.org