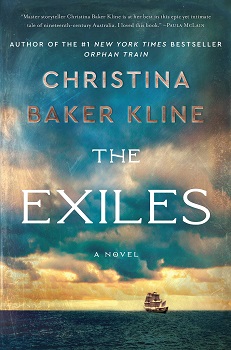 The Exiles by Christina Baker Kline

Scorching summer days call for some escape reading—engrossing books that transport you to another time and place so you can ignore the heat at home. Christina Baker Kline’s latest novel, The Exiles, does just that, sailing from 1840s London to Van Diemen’s Land, a penal colony in what is now known as Tasmania.

Readers of a certain age may recognize the name from a U2 song about the leader of an 1848 Irish uprising. However, they may not know that British women as well as men were exiled “down under,” many for petty crimes. Approximately 12,500 women were sent to New South Wales, Australia, and an equal number landed in Van Diemen’s Land. Some went directly to prison, while others were assigned as workers in local households.

Kline (pictured) surmises that the fledgling colonies had great need for cheap labor—and the many men already “transported” to Australia to serve seven or 14-year sentences had great need for women. Approximately 20 percent of today’s Australian population are descended from people transported as convicts. While life for the convicts was often brutal and extremely challenging, some did survive and manage to build new lives for themselves upon release.

The Exiles centers around several young women who have each been torn from their homes under terrible circumstances. Evangeline, a vicar’s daughter, is working as a governess when she’s accused of stealing a ruby ring and lands in the fearsome Newgate Prison. Hazel, a skilled midwife, has more street smarts than Evangeline but is nevertheless charged with theft of a silver spoon. Olive, saucy and unrepentant, is convicted for prostitution. They meet aboard the converted slave ship Medea and bond over the course of a miserable, four-months-long passage from London to Hobart Town.

Before long, Hazel is assigned to work as a maid for Governor Franklin’s household. There, she meets Mathinna, an aboriginal orphan girl who has been taken on as curiosity by the governor’s wife. Conversant in English and French, tutored in mathematics and ballroom dancing, Mathinna is bright and desperately lonely. Hazel recognizes Mathinna’s precarious position and shows her some of the only kindnesses of her young life.

Kline keeps the plot humming along—the women’s travails in prison, Mathinna’s Pygmalion transformation, a sinister deckhand from the Medea who resurfaces, bent on revenge. Kline sprinkles in the sights and scents of Tasmania and rich details about the practice of medicine and midwifery during that time period. Though rich and entertaining, this book can be devoured in a few short sessions.

Kline excels at historical fiction. Her novel Orphan Train shed light on the resettlement of more than 200,000 orphaned children to the American West between 1850 and 1930. A Piece of the World is a novel about the painter Andrew Wyeth and the subject of one of his most iconic paintings, “Christina’s World.”

Each of Kline’s books features strong female characters grappling with their identities and their roles in society. She includes enough historic detail to be vivid and descriptive without bogging down the plot. Importantly, while her characters are relatable to modern readers, they’re not anachronistic. It’s easy to believe they are of their time and it’s compelling to root for them. Better yet, while we’re reading about them we enter their world and forget all about the temperature here at home.