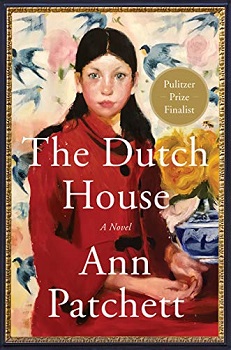 The Dutch House by Ann Patchett

Bel Canto, the exquisite novel about an opera singer and a dozen guests held hostage at a South American embassy, came out in 2001 and left such a positive impression in my memory that every time I see a new Ann Patchett title I check it out from the library without question.

After a few weeks at home compulsively updating the Johns Hopkins COVID-19 Map and watching the total confirmed case counts rise, I was ready for some of Patchett’s lyrical, insightful character development to distract me, and luckily, I had her latest release The Dutch House at hand.

Patchett’s new book is contemplative and quiet, spanning many decades, from 1945, when Cyril Conroy impulsively purchases a stately mansion in Elkins Park near Philadelphia. Intended as a gift for his wife as well as a symbol of their rising fortunes, the Dutch House is not well-received by Mrs. Conroy. She loathes every inch, from the Delft tile fireplace mantel to the large oil paintings of the somber original owners on the walls.

To her, the house, and her marriage, become oppressive to the point that she deserts her husband and young children with no explanation nor further contact.

Narrated by the son, Danny, The Dutch House explores the tight bond that forms between Danny and his older sister Maeve. Although materially wealthy, the siblings are largely ignored by their emotionally distant father, who focuses on his business ventures and assigns two housekeepers to raise them.

Danny and Maeve’s lives take another turn for the worse when Cyril brings home a second wife. Andrea takes an instant dislike to her stepchildren, making it her prime focus to dislodge them from their beloved home. As their fortunes fall, Danny and Maeve’s relationship evolves, as does their relationship to the Dutch House, which looms large, almost as a character in its own right.

While the ending is not wholly satisfying, the book as a whole has been compared to a modern fairy tale, best for readers who prefer character development over plot. The audiobook version is narrated by Tom Hanks, and by all accounts he does a riveting job.

Patchett is not only a novelist, she’s also co-owner of an independent bookstore in Nashville, Tennessee. When COVID-19 first closed Parnassus Books to the public in April, Patchett wrote a blog post, “Running a Bookstore in a Pandemic.”

Whatcom County Library System couldn’t agree more! We know our community of readers loves our local bookstores and loves our public libraries, and WCLS is proud to connect information, ideas and community.

Christine Perkins is the executive director of the Whatcom County Library System. Visit https://www.wcls.org to place holds on physical library materials and designate a library location for curbside holds pickup. People who do not have internet access can call (360) 305-3600 to speak to a WCLS staff member who can place holds for them. You can also find access to eBook and eAudiobook versions of Patchett’s books at the website. Photo of Ann Patchett by Heidi Ross.