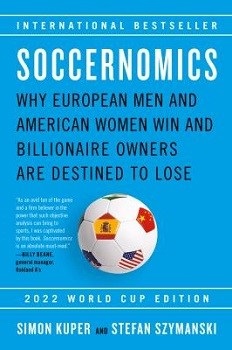 Soccernomics: Why European Men and American Women Win and Billionaire Owners Are Destined to Lose by Simon Kuper and Stefan Syzmanski

Fans of the “beautiful game” who are finding it hard to ethically rationalize watching the World Cup this go-around may take interest in the 2022 World Cup Edition of Simon Kuper and Stefan Syzmanski’s seminal work “Soccernomics: Why European Men and American Women Win and Billionaire Owners Are Destined to Lose.”

This fascinating study has been greatly updated and expanded since it first came out in 2009, and a future edition will no doubt include further analysis of the economics of hosting the World Cup tournament and the devastating impacts on the workers brought in by host countries to build stadiums.

For those unfamiliar with the original work, “Soccernomics” is to soccer as “Moneyball” is to baseball — a quantitative analysis of the various aspects of the sport, intended to provide insights about what makes teams successful.

Kuper, a columnist for the Financial Times, and Szymanski, a professor of Sport Management at the University of Michigan, were drawn together based on their love of the game and their love of numbers. They note their books are not about money: “The point of soccer clubs is not to turn a profit (which is fortunate, as few of them do).” Instead, they use economic tools and principles, combined with those from the fields of psychology and sociology and other social sciences, to inform our understanding of the sport.

This edition includes a chapter addressing racism in soccer, specifically the transfer system of “buying” and “selling” players. According to the authors, this system is unjust as well as inefficient. While wages buy success — spending more for talent translates into better performance — clubs are notorious for making poor decisions and there is historical statistical evidence of racial discrimination. Today, Black players are overrepresented on European teams compared to the general population. However, discrimination persists in attitudes about playing style, wages and suitability to coach.

Kuper and Syzmanski also tackle inequities between men’s and women’s soccer, suggesting that financial reparations should be paid to women. They recount the first international women’s soccer match, England versus France, in 1920, which drew a crowd of 53,000. Although attendance was higher than most men’s events, the English Football Association decreed in 1921 that all Association clubs must refuse to let women use their fields, exiling them to playgrounds and substandard venues. Countries around the world followed suit, stymieing the women’s game for more than a half-century.

The authors include copious anecdotes and observations that illustrate the lighter aspects of soccer, particularly in regard to soccer fans. They do a deep dive into whether or not the hardcore devotees depicted in Nick Hornby’s beloved book “Fever Pitch” actually exist, or whether soccer supporters are actually polygamists. They make the case that for affluent countries, hosting a World Cup brings happiness. They also report that the camaraderie and shared experience of watching soccer reduces suicide rates across Europe.

Kuper and Szymanski revel in the fact that most professional clubs now employ a cadre of data analysts crunching numbers to improve their competitive advantage. They also admire freely available open-source data tools and the way the democratization of data brings fresh understanding of the game. It is their view that soccer as an industry will continue to expand, with streaming services adding revenue and making matches more available to viewers. Those who love soccer, especially the numbers associated with soccer, will have plenty to chew on for years to come.

Christine Perkins is the executive director of Whatcom County Library System, wcls.org. She spent more than a decade on the sidelines cheering for her children’s Whatcom FC Rangers soccer teams.