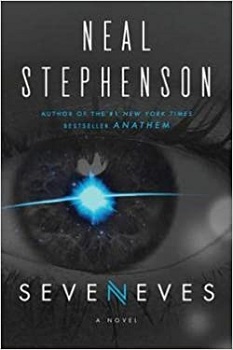 For a brief moment on Sat., May 30, the world’s attention soared beyond the earth, following the launch of the SpaceX Crew Dragon on its first manned mission.

There were high-fives and cheers, and a feeling of excitement and possibility. Then came breaking news from Minneapolis, New York, Seattle, and elsewhere, of peaceful protests turned violent. It wasn’t long before someone posted this gem on Twitter: “Congratulations to the Astronauts that left Earth today. Good choice.”

In Neal Stephenson’s epic Seveneves, the situation on Earth is even more dire. The novel’s first line explains the setup: “The moon blew up with no warning and for no apparent reason.”

Shattered into seven pieces, the fragments are now smashing together, creating a meteor storm of devastating proportions, one that will soon block off the sun’s light and end all life on Earth. The world’s leaders amazingly come together with a Hail Mary plan to save the human race. Each country will send up two people, one man and one woman, to populate a colony built around the International Space Station, affectionately known as Izzy.

This massive tome (867 pages in the version I read) is split into three parts. The first is the exodus—the frantic rush to build the Cloud Ark, outfit it, and launch pioneers into orbit. Stephenson packs in the scientific details, giving plausible explanations for how everything will work, while keeping the plot zooming along at a rapid pace.

Part Two starts at Day 700 since the destruction of the moon. “Arkies”—those selected by the Casting of Lots—live in a network of arklets trailing Izzy. Members of GPop (short for General Population) live in Izzy itself, and represent the mission’s experts and leadership. The groups are only kilometers apart physically but the separation between them runs deeper.

Stephenson (pictured) builds the tension as the seconds count down to the White Sky and the Earth goes dark. He then adds in political intrigue and power struggles to examine how a new society develops in extreme circumstances. Challenge after challenge faces the remaining humans and human foibles still get in the way of basic survival.

In Part Three, Stephenson leaves the world of hard science fiction and veers more towards speculative fiction. For readers who enjoy world-building, learning how humankind evolves over 5,000 years is fascinating and insightful. However, even steadfast Stephenson fans may find themselves weary of yet another drawn-out description of orbital forces, asteroid mining, or any number of highly technical topics. My advice: Skim the lengthy expository sections and stick around for the philosophy and social commentary.

Reading Seveneves is a major time commitment. But time seems to be something many of us have more of these days, and having a thought-provoking book to sink into is the ultimate distraction. Besides, with the way things are playing out here on Earth, we may need to start thinking about what we can do better if we were to start all over again somewhere else.

Christine Perkins is the executive director of the Whatcom County Library System (WCLS). One of her top 10 books she’d bring with her into space is The Right Stuff by Tom Wolfe, with Space by James Michener as a runner-up. She’s excited that WCLS is now offering curbside holds pickup in Phase 2 and encourages everyone to search the library catalog online at https://www.wcls.org to place holds. People who do not have internet access can call (360) 305-3600 to speak to a WCLS staff member who can place holds for them.