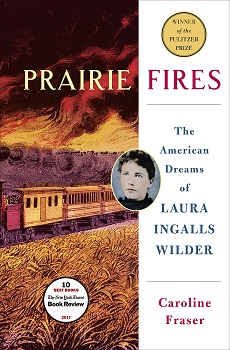 Anyone who remembers reading the “Little House” books as a kid or watching Melissa Gilbert play Laura and Michael Landon play Pa on the television series based on the books will want to read Prairie Fires: The American Dreams of Laura Ingalls Wilder.

Caroline Fraser, who edited the Library of America edition of the book series, conducted significant research to pull together this Pulitzer Prize-winning biography. Fraser makes the case that while Laura Ingalls Wilder’s life as she portrayed it in her books seemed simple and mostly rosy, it was in fact full of hardship, extreme poverty and complex relationships.

This biography is not simply about Wilder, it’s also about her relationships with her mother Caroline and her daughter Rose, placed in the historical context of 19th century American territorial expansion.

For readers who faithfully devoured Wilder’s books and followed her family from the big woods of Wisconsin to Kansas and Minnesota, then on to Dakota Territory and finally to Missouri, the pioneer experience was full of adventure, natural beauty and the love of God and family.

It’s not a stretch to believe that for many students, Wilder’s nostalgic portrayal of her childhood shaped their understanding of Manifest Destiny and American history. The mythical Ingalls family was brave, resilient and just, so therefore all pioneers who spread across the American landscape were admirable as well. Every farmer was clever and hardworking like Pa, every farmer’s wife was gentle and kind like Ma, and every freckle-faced tomboy grew up to be a friendly but formidable schoolteacher.

We grew up loving the charming, hand-spun stories and did not choose to dig deeper into more troubling issues such as the cruel treatment of indigenous peoples, the destruction of the land, the loneliness and struggle to survive through harsh winters, draught and plagues of locusts. Fraser delivers this historical background in a style reminiscent of Tim Egan’s The Worst Hard Time, or The Warmth of Other Suns by Isabel Wilkerson.

According to Fraser, Wilder began writing her memoirs in her 50s, as a strategic effort to improve her family’s financial prospects after near ruin from the stock market crash of 1929. She gathered stories of her childhood into a work originally entitled Pioneer Girl.

Thanks to connections her daughter Rose had to the publishing industry, Wilder was signed by Harper & Brothers and Little House in the Big Woods came out in 1932. In Fraser’s account, Wilder deliberately chose to highlight happier memories that children could appreciate, selectively telling those with teachable moments about the virtue of hard work and frugality.

Fraser is not out to destroy Wilder’s reputation nor disparage her legacy. Instead, she carefully examines the historical context for Wilder’s life and her writing and explores claims that Wilder’s daughter Rose Wilder Lane actually authored the “Little House” books.

By analyzing letters, edited manuscripts and other works written by both women, Fraser concludes that Lane may have been responsible for some revisions to the novels, but her mother was their primary creator.  While Fraser is admiring of Wilder, she is less appreciative of Lane, chronicling Lane’s struggles with truth and sanity and her prickly relationship with her mother.

Readers who loved Wilder’s books will enjoy learning the backstory behind them. Prairie Fires also serves as an excellent primer on the real-life pioneer experience. Finally, it offers a peek into the life and mind of a talented writer whose books inspired generations of readers.

Christine Perkins is the executive director of the Whatcom County Library System (WCLS). WCLS is celebrating its 75th year of sharing stories with the rural parts of Whatcom County.