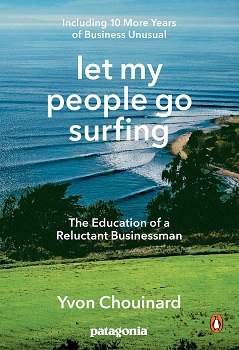 Let My People Go Surfing: The Education of a Reluctant Businessman by Yvon Chouinard

Everywhere you look in Whatcom County, Patagonia clothing is ubiquitous. Maybe it’s because so many of us love to spend time being active in the outdoors. Maybe it’s because the clothes are high quality and last a long time. Maybe owning expensive gear is a status symbol. Or perhaps Patagonia’s long-held environmental values resonate with local consumers.

Whatever the case, the folks at Patagonia don’t care. In 2011, they even took out a full-page ad in the New York Times proclaiming, “Don’t Buy This Jacket.” It detailed the environmental costs of buying a new Patagonia fleece and encouraged people to hold on to their old ones instead. This may seem like a strange message for an international retailer. But it’s entirely consistent with the worldview of Patagonia’s founder and owner, Yvon Chouinard (pictured), as explained in his memoir/business primer Let My People Go Surfing: The Education of a Reluctant Businessman.

Chouinard’s book first came out in 2005, and was updated and re-released in 2016. This book has something for a wide variety of readers—tales of adventure in a bygone era, a who’s who of outdoor sports legends, Chouinard’s comprehensive philosophies on everything from product design, human resources, supply chains and branding, and finally, a case statement for running an environmentally responsible business.

There are fascinating pictures and call-outs from Chouinard’s colleagues—like his ice climbing buddy Tom Brokaw, who relates a story about a time when Chouinard refused to rope up with him while climbing Mt. Rainier. “No way,” Chouinard said. “If you go, then I go, and I don’t want to do that. This is like catching a taxi in New York. It’s every man for himself.”

Chouinard is truly an original. A French-Canadian whose family relocated to California when he was 8 years old, Chouinard didn’t get into rock climbing until high school, when he learned how to rappel down cliffs while seeking out falcon aeries with his falconry club. A summer road trip to Wyoming turned into an annual pilgrimage to the Tetons, spending three months every year climbing, fly fishing and camping with fellow “dirt-bags.” In the off-months, he’d head to Baja to surf.

In 1957, Chouinard had the idea to make his own climbing hardware, so he bought a forge and an anvil and set up shop. First came innovative pitons, followed by carabiners. As his designs increased in sophistication, he hired an engineer. Sales grew, and he added a bookkeeper. By 1970, Chouinard Equipment was the largest supplier of climbing hardware in the United States.

Later, he started selling sturdy rugby shirts that held up well on breezy peaks. Then he designed some climbing shorts, spinning off the clothing line that became Patagonia, designing a logo inspired by the Andes peaks of Mt. Fitzroy. Today, Patagonia clears more than $800 million a year and pledges one percent of its profits to grassroots environmental organizations.

As Chouinard himself attests, “It’s business that has to take the majority of the blame for being the enemy of nature.” While acknowledging that money won’t solve everything, Patagonia has donated more than $100 million to date, including $10 million in 2018 to offset tax cuts delivered to corporations by the Trump administration.

Chouinard has strong opinions about leadership and corporate responsibility. Those interested in entrepreneurship will find much to inspire them. His environmental message is equally compelling. While it would be easy to be cynical about Chouinard’s success (environmental activism is “good for business” with “belief-driven buyers”) on the whole he comes across as sincere, authentic and passionate about saving our home planet. His book is available from your libraries in print our audiobook formats.