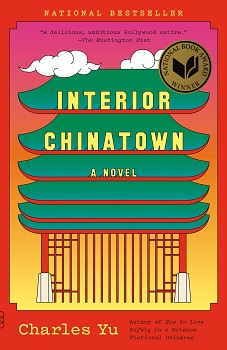 Charles Yu’s book Interior Chinatown is a swift kick to the gut—an unexpected, powerful jab at stereotypes and anti-Asian racism that manages to be hilarious as well as heartbreaking.

Told entirely in screenplay format, it stars Willis Wu as GENERIC ASIAN MAN, a bit player in his own life. Willis is an aspiring actor going through the motions, trapped in endless roles like DELIVERY GUY and STRIVING IMMIGRANT. Sometimes he’s GUY WHO RUNS IN AND GETS KICKED IN THE FACE. But what he wants—what he thinks he wants, anyway—is to be KUNG FU GUY, the highest achievement he can imagine.

Willis lives in an SRO (single-room occupancy) apartment above the Golden Palace Restaurant. The SRO is home to multiple generations of immigrants from a variety of East Asian countries, scraping by, waiting in long lines for the bathroom, fighting off hunger and boredom and loneliness. Only OLDER BROTHER seems to have found his way out—he’s the prodigy, the mythical success story, the one with good hair and top-notch martial arts skills, and he’s a National Merit Scholar. Willis wouldn’t even try to measure up, were it not for his mother’s insistence that Willis “be more.”

At times, it’s challenging to tell if Willis is actually an extra in a cheesy cop show called Black and White (because one cop is black, and, get this, the other one is white) or if the show is something he’s imagining. Maybe it’s a metaphor for something else. Yu keeps you guessing, and wincing, such as when Willis is forced to fake a Chinese accent because no one believes he can speak perfect English.

There are lighter moments—like when Willis gets notice that he can’t take another role on the show for 45 days after his character has been killed. After that, people won’t remember where they’ve seen him before. And that’s the crux of the issue: that some people believe “all Asians look alike.” Willis, like so many others, feels invisible—is invisible. Even in his interior monologue he feels inferior.

Yu traces the journey of Willis’s Taiwanese immigrant parents, their hopes and dreams and their sad transition from YOUNG BEAUTIFUL LOTUS FLOWER to DRAGON LADY and from SIFU THE MYSTERIOUS KUNG FU MASTER to WIZENED CHINAMAN.

Willis brings his dad the prescriptions he can’t afford and cringes over the accumulated mess of hoarded soy sauce packets and crusty Kleenex. If this is what happens to a once strong and fearless warrior, what’s ahead for Willis?

Interior Chinatown won the National Book Award in 2020 and is certainly worthy of the acclaim. With the recent dramatic uptick in anti-Asian discrimination and violence across the country, it would be great if more people read this book to learn about and perhaps gain some empathy for the Asian immigrant experience. Readers will also be exposed to a vibrant, creative voice in modern American literature.