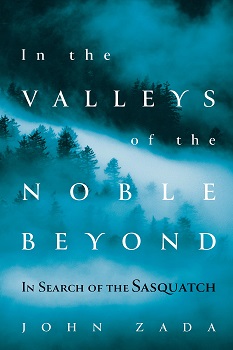 In the Valleys of the Noble Beyond: In Search of the Sasquatch by John Zada

But are they animal? Supernatural? Extraterrestrial? All three theories have their adherents; differences of opinion abound and bona fide data is sorely absent.

With these questions in mind, journalist John Zada left his home in Toronto for British Columbia’s Great Bear Rainforest, the largest intact temperate rainforest in the world, and a place where centuries of Sasquatch stories thrive. Initially intended to be a magazine article, as Zada followed lead after lead, he realized there was a book worth of stories waiting to be uncovered. In the Valleys of the Noble Beyond: In Search of the Sasquatch is the result of that journey.

Although tracks, unusual sounds and glimpses of shadowy forms that resist conventional assignations are at the core of most Bigfoot reports, Zada recognizes that it is the Bigfoot “classics” that really capture our imaginations. The creatures in these stories are self-aware, preternaturally intelligent and fearsomely strong.

Zada recounts the story of Albert Ostman, a logger who claimed he was kidnapped in his sleeping bag while prospecting just south of the Great Bear Rainforest in 1924. After being dragged through the night, Ostman found himself in a clearing surrounded by a nuclear family of Sasquatch who kept him prisoner for a week.

In the same year, a cabin of five miners prospecting on the slopes of Mount St. Helens was attacked in a fearful, all-night barrage by “ape-like” creatures. The attack stopped and the miners fled at daylight; the forest ranger who met the fleeing men said in an interview that “he’d never seen grown men more frightened.”

In addition to recounting these Bigfoot classics, Zada interviews British Columbia locals such as John Bindernagel, a wildlife biologist who spent half a century trying to get the Sasquatch included in the lexicon of North American mammals, as well as Heiltsuk, Kitasoo, and other First Nations people who have lived on Great Bear Rainforest land for centuries.

Skeptics question how it is that there haven’t been more sightings of the Sasquatch. Where are their bones? Their homes? As Zada experiences the vastness of Great Bear, he wonders if our urban-centric biases may be underestimating the remote habitats that still exist in parts of the world where an intelligent, adaptive, nocturnal and elusive creature could live outside human experience.

He also considers that the Sasquatch may reside “in the place most difficult for us to find and navigate;” the gray middle ground between “it exists” and “it doesn’t exist.” Believing they are a combination of physical being, spirit, symbol and teacher, the relationship of some First Nations people to the Sasquatch resides in this territory.

Is it possible that our interest in the Sasquatch really has more to say about us and what we yearn for? Zada feels he has been fruitlessly circling around an actual Sasquatch, and begins to find more relevance in what his fascination with the creature says about him. Ultimately, perhaps the greatest significance of the Sasquatch is the lure of the blank spot on the map, the possibility of the supernatural, the existence of nature untouched by humans.

Lisa Gresham is the Collection Services Manager at the Whatcom County Library System. To find out more about Sasquatch in our region, book a trip with Bigfoot Adventures at www.thebigfootadventures.com