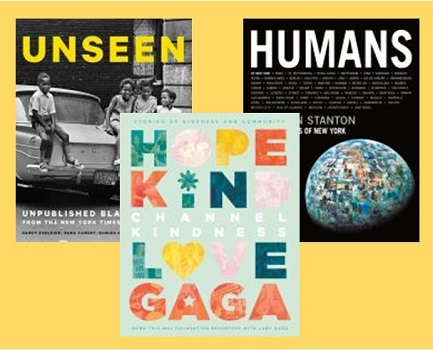 It’s been a long and challenging year, and many of us are having trouble concentrating enough to read or just want feel-good reading.

To that end, this year’s suggestions for holiday gift books have in common the theme of kindness, compassion and shared humanity. They are the type of books that are lovely to have on your coffee table to dip into and savor the stories as time permits. While asking little in terms of reader commitment, they give back generously in heart.

Brandon Stanton made a name for himself when he started the photoblog Humans of New York in November 2010 and quickly developed a large social media following. During the ensuing decade, Stanton has interviewed people from more than 40 countries. Humans is a fascinating compendium of photos and candid quotes from the people who shared their hopes, dreams and life stories with him.

Images juxtaposed on the same page add to their poignancy and power, as in the woman and her young child from the Tongping Internally Displaced Persons camp in South Sudan whose quote, “I’ve seen a lot of death” is directly above that of a young child from New York, sitting next to a bike dressed in a lion costume and cape, who shares “there is nothing hard about being four.”

More often than not, the stories and images reinforce ways we are the same, despite the fact that cultures and countries may feel worlds apart. I loved the images of obvious delight grandfathers in Chile, the United States, Pakistan, and France had at the simple pleasure of spending time with their grandchildren, “eating cookies before lunch because Grandpa doesn’t have any rules.”

Humans is eye candy for the visually inclined, as well as a love letter to humanity, and its testament to the universality of the human condition is a balm to the spirit during a time of great divisiveness.

Lady Gaga introduces Channel Kindness: Stories of Kindness and Community by talking about the pain and struggle childhood bullying and growing up around alcoholism caused in her own life, and the realization that during all the most difficult times, “in every instance, there was an absence of kindness.”

The stories of goodness and bravery from young people all over the world that are shared in Channel Kindness endeavor to make sure that no young person need experience that absence again. This project arose from Lady Gaga’s Born This Way Foundation, a nonprofit that collects stories about the resilience of young people in the face of adversity. More than 50 topics are represented in these stories, with a customized message from Lady Gaga at the end of each story. It’s intended for young people, but this would make an inspiring gift for all ages.

When New York Times photo editor Darcy Eveleigh discovered dozens of stunning unpublished photographs of Black Americans—famous people as well as ordinary citizens going about their lives—she enlisted the help of three colleagues to investigate why such fabulous images had never seen the light of day through publication.

They embarked on a quest to investigate if the Times had contributed to the erasure of stories from Black America. Not surprisingly, they discovered that systemic racism and editorial biases played a part in relegating these images to archival bins. Unseen: Unpublished Black History from the New York Times Photo Archives publishes the best of these images for the first time.

Of Unseen, historian and filmmaker Henry Louis Gates Jr. says, “The book simulates what it would have been like to read the Times each day for the last half-century, if the full picture of the African American experience had made the cut. If any book proves that it is never too late to publish ‘all the news’—and images—‘fit to print,’ this is it.”

Lisa Gresham is the Collection Services Manager at the Whatcom County Library System (https://www.wcls.org). If you decide to purchase any of the suggested titles as gifts, please consider supporting local businesses.