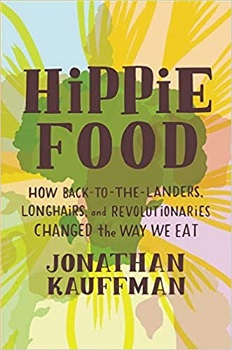 Hippie Food: How Back-to-the-landers, Longhairs, and Revolutionaries Changed the Way We Eat by Jonathan Kauffman

There is no shortage of “hippie food” in Bellingham. Between the Wednesday and Saturday Farmers Markets, the Community Food Co-op, CSA Farm Boxes, meat shares, Whole Foods, and community gardens—we’re up to our ears in whole grains, organic produce, kombucha, lentils and tempeh. Practically every restaurant has a vegan option; Sage Against the Machine is a 100 percent vegan food truck.

Readers of a certain age may remember when salsa was a strange and exciting taste sensation, or when cooking a stir fry—with soy sauce!—was considered creative and cultural. Granola was another oddity, as was yogurt. In Hippie Food: How Back-to-the-Landers, Longhairs, and Revolutionaries Changed the Way We Eat, author Jonathan Kauffman takes us back, and chronicles the rise of what he calls “hippie food” in a culinary and cultural history of the United States.

Taking a journalistic approach, Kauffman portions out his story into three eras. He calls the first era before 1968 “pre-history.” The second era, from 1968 to 1974, he calls the “revolutionary era” because of the great political changes afoot, with food as fuel for the fire. The third and current era is one characterized by an emphasis on lifestyle changes for a broader audience—healthy eating for the masses. He looks at the origins of “hippie food” in the health food, macrobiotics and whole foods movements, traces the industrialization of food, and explores the counterculture’s creation of a new cuisine that they then introduced to the mainstream.

Along the way, Kauffman introduces us to a full menu of colorful characters, from the proprietors of the Aware Inn on the Sunset Strip—one of the first restaurants in the U.S. to use the word “organic” on its menu—to “dietary evangelists” Paul Bragg and Gayelord Hauser, who preached bran breads and salads as the pathway to movie stardom.

There’s Gypsy Boots, who opened the Back to Nature Health Hut, Arnold Ehret, proponent of the mucusless diet, and Adelle Davis, a biochemist whose book Let’s Eat Right to Keep Fit earned her the moniker the “high priestess of nutrition” by Time magazine.

Kauffman does a deep dive into whole wheat breads, tofu (soy products being a super-efficient and sustainable way to feed the masses), vegetarianism, the rise of food co-ops, and more. He maintains a quick pace and sprinkles in lots of details to keep things interesting.

If you own a dog-eared and drip-splattered copy of The Moosewood Cookbook, you’ll savor Kauffman’s fascinating stories about the people who transformed the way Americans eat. You may also enjoy digging into the source materials that inspired the movement—WCLS owns copies of A Diet for a Small Planet by Frances Moore Lappé, as well as the Tassajara Bread Book by Edward Brown and The Good Life by Helen Nearing. Or call and request Zen Macrobiotics via Interlibrary Loan.

The only downside to all this reading—a hearty appetite. Just make a quick trip to the Co-op so you can nibble as you turn the pages.