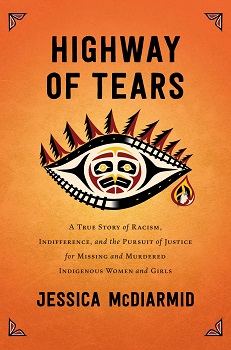 Highway of Tears: A True Story of Racism, Indifference and the Pursuit of Justice for Missing and Murdered Indigenous Women and Girls by Jessica McDiarmid

As teenagers are wont to do, Ramona told her mother she’d be spending the weekend at her best friend’s house, a common occurrence. When she didn’t show up, the friend assumed Ramona had gone to another friend’s house in a nearby town.

This was pre-cellphone days, and it wasn’t unusual for plans to change. Plus, Ramona was confident, independent, the responsible one. No alarms went off until Ramona didn’t show up at school or her job on Monday, and friends and family pieced together that no one had seen Ramona all weekend.

When Ramona’s mother reported her missing daughter to the Royal Canadian Mounted Police (RCMP), she was advised to give Ramona some time to return home. It was summer, after all, and well, teenagers. The first story in the local paper appeared 11 days after Ramona was last seen. Police were not treating the case as foul play, although they didn’t rule anything out. A month later, the Missing Children Society of Canada came to Smithers to help with the search.

Nearly a year later, Ramona’s body was found in a wooded area west of the Smithers Airport. Her death remains unsolved.

A disproportionate number of these disappearances occurred in British Columbia, many of them along a 450-mile corridor of Highway 16 between Prince George and Prince Rupert that has earned the moniker “Highway of Tears” by the families of the missing women.

This stretch of highway is extremely remote, with long distances between towns. With the absence of public transportation along the highway, community members who cannot afford transportation frequently rely on hitchhiking to get to neighboring communities for jobs and social events.

Each year, families who have lost loved ones walk this section of the highway to remind the world that the mystery of what happened to their daughters, sisters, wives and mothers remains.

Rather than recounting case details, McDiarmid takes time to get to know these women and girls through interviews with those closest to the victims. In many cases, McDiarmid and families of the victims felt that the RCMP did not make investigation into these disappearances a priority because of the ethnicity of the victims.

This claim was reinforced when, in 2002, a young Caucasian woman named Nicole Hoar went missing and the RCMP and media began to focus more closely on women who had gone missing or were murdered along Highway 16.

In 2005, the RCMP did create a special task force that was dedicated to solving cases of missing and murdered persons along the Highway of Tears. More than a decade later, the Canadian government announced an official National Inquiry into Missing and Murdered Indigenous Women. Despite these efforts, and the ongoing efforts of the families to find out what happened to their loved ones, Indigenous women continue to disappear in both Canada and the United States.

Addressing this issue with technology, local author and software engineer Clyde Ford recently developed a software app whose goal is to reduce the number of missing and murdered Native women. Called Tribal Watch MMIW, when activated, the app silently sends out an emergency alert to friends, family or even the tribal law enforcement.

Lisa Gresham is the Collection Services Manager at the Whatcom County Library System—where you can experience the “power of sharing” by visiting in person or online at https://www.wcls.org.