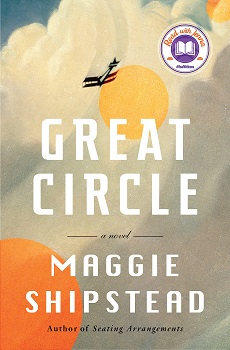 Author Maggie Shipstead was not on my radar until picking up her latest novel, Great Circle, and now I’m wondering how I missed her previous novels. An epic, swashbuckling novel that spans a century, described by The Telegraph as “a masterclass in historical fiction,” Great Circle’s two engaging heroines are daring and adventurous women, determined to chart the course of their own lives, no matter the cost.

At the heart of the story is Marian Graves, saved as an infant from a sinking ship to be raised by a well-meaning but inattentive artist uncle in 1914 rural Montana. When Marian is swooped over by a barnstormer pilot “at an age when the future adult rattles the child’s bones like the bars of a cage,” the event deeply impresses her and instills an unshakeable ambition to be a pilot.

Such dreams are not easily grasped for young women of that era, however, and the path to flight for Marian involves an ill-fated, complicated and sometimes abusive relationship with a wealthy bootlegger who pays for her flight lessons and buys her a plane in exchange for marriage and contraband delivery flights over the Canadian border.

It is a relief when Marian escapes this marriage and, with a new name and identity, disappears into the wilds of Alaska, finding work as a bush pilot. When the United States joins the Great War, Marian signs up for an all-women pilot corps that takes her overseas where she finds a tender, tentative love with one of the other women pilots, although wartime demands ultimately separate them.

Circumnavigating the globe longitudinally by flying over both poles holds a great allure for Marian, and after the war she embarks on her own attempt at this feat. While heading north towards New Zealand, Marian, her plane, and her navigator, Eddie Bloom (in one of many interwoven threads, Eddie is the gay husband of Marian’s wartime lover, Ruth) vanish near the Ross Ice Shelf. Years after her disappearance, a journal that appears to be Marian’s is found floating in a life preserver in the Arctic Ocean.

This journal becomes the basis for a film about Marian’s life in a parallel storyline set in 2015 Hollywood. Hadley Baxter is a scandal-plagued movie star of a Twilight-esque series of fantasy films, and the opportunity to play Marian is a path to get her faltering career back on track. Hadley feels a strange affinity with Marian, but trying to piece Marian together from the scraps left behind proves a formidable task, begging the question of how much we can actually understand the inner life of historical figures.

Shipstead is also a travel writer, specializing in desolate landscapes and polar regions, and during the seven years of writing Great Circle she made five trips to the Arctic and two trips to Antarctica. Her research amassed an eclectic book collection including books on ships and planes, the history of flight, historic Montana, Sing Sing prison, and Canadian landscape painters.

One of the most interesting themes in Great Circle is Shipstead exploring her fascination with the idea of disappearance. The many ways that various characters find to disappear—into the landscape, into themselves, into sex or love or alcohol—makes for interesting discussion.

Although reading Great Circle is a hefty undertaking—the print edition is 608 pages—this remarkable novel is a perfect candidate for an immersive end-of-summer read that will have you lingering over every page, wishing it didn’t have to end.

Lisa Gresham is the Collection Services Manager at Whatcom County Library System (WCLS) which brings the power of sharing to rural Whatcom County. Great Circle is available in print, eBook, and eAudiobook; as the WCLS eRead of the Month, with a WCLS library card, there is no waiting during the month of August for the eBook and eAudiobook. Info: https://www.wcls.org