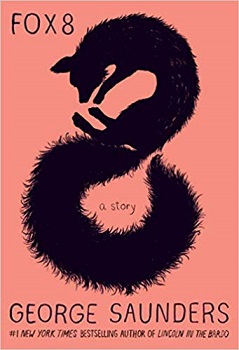 Back in 1995, there was a fabulous movie about a little pig who learns to herd sheep; maybe you remember it?

My husband and I referred to Babe as the “best talking pig movie of the year” because there were actually two talking pig movies released that year—Gordy was the other—and really, there is no comparison. (Both are available at your local libraries; if you want to see for yourself, head to https://www.wcls.org.)

So when I say Fox 8 is the best talking fox book for adults of the year, you will know a few things about me: 1. I have a high tolerance for talking animal stories; 2. I am a little behind the times as Fox 8 was first published in 2013 but was re-released in its illustrated edition in 2018; 3. There are tons of talking fox books for children but not as many for adults; and 4. I think Fox 8 by George Saunders, illustrated by Chelsea Cardinal, is pretty special.

You may know Saunders for his wildly inventive novel Lincoln on the Bardo, which won the Man Booker Prize in 2017. It doesn’t seem like much of a stretch for an author who imagined the ghost of Abraham Lincoln’s son Willie, trapped “in the bardo” between death and reincarnation, to have also written a book told from the point of view of a wild fox. Fox 8 learns to speak “Yuman” by observing a mother reading bedtime stories to her children.

We first get a sense of Fox 8, a curious, dreamy fellow whose ability to understand Yuman does not extend to the conventions of English spelling, grammar or punctuation. He “luvs heering the Storys” told by “the lady to her pups.”

“It made me feel gud, like Yumans cud feel luv and show luv. In other werds, hope full for the future of Erth!” He isn’t as thrilled with the story he hears about a fox who “trikked a Chiken” as he feels that foxes and chickens have a “Super Fare Deel, which is: they make the egs, we take the egs, they make more egs.”

Fox 8 uses his speaking and reading skills to try to make sense of the commotion in the forest. Yumans are “rekking” the forest to build “FoxViewCommons” (a “Mawl”), causing death and destruction to foxes and other living things. This sweet fable takes a dark turn, and Fox 8 asks, “what is rong with you people?” He types out a note to humanity, and ends with some advice: “If you want your Storys to end happy, try being niser.”

The short story includes whimsical line drawings of chickens wearing glasses, foxes hiding in a SuperMall, and Fox 8 typing on a manual typewriter. These add charm and emotion to the tale. Fox 8 is a slim tome that’s good for a giggle as well as some quiet contemplation. A dear Friend of the Library from Point Roberts suggested I give it a read and now I pass it along to you.