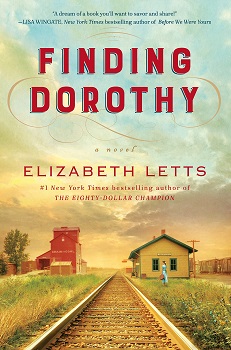 Before the ubiquity of DVDs and Netflix, families wishing to share a little movie magic by watching the annual rebroadcast of MGM’s The Wizard of Oz had to keep a keen eye on the TV listings. It often ran in winter, and was a must-see before the holidays. Millions tuned in to see Dorothy and her dog Toto follow the yellow brick road to Oz.

Way before it was a yearly television mega-event, The Wizard of Oz was an Academy Award-nominated feature film based on a series of children’s books by L. Frank Baum. The film was released in 1939, 20 years after Frank’s death. Elizabeth Letts’ novel Finding Dorothy begins in 1938, in Hollywood, where Frank’s beloved widow Maud is determined to insert herself into the filmmaking process to make sure the film stays true to her husband’s vision.

The daughter of suffragette leader Matilda Joslyn Gage, Maud attended Cornell University in 1880, where she was subject to much bullying from her male classmates. When introduced to her roommate’s cousin Frank, Maud was immediately captivated by his energy and creativity. She accepted his marriage proposal and dropped out of college.

Though Maud and Frank’s marriage was passionate and nontraditional, it was not without its difficulties. Frank was a dreamer and did not have a head for business. His unsuccessful stints as an actor, a salesman and a reporter often took him away from home. With four young sons, the family finances became dire and they lived frugally in a home with no running water. Frank finally had a breakthrough in 1897, publishing Mother Goose in Prose. In 1900, he penned The Wonderful Wizard of Oz to much critical and financial success. Maud, his staunchest supporter, received the literary rights, and was considered the “Mother of Oz.”

Letts chose historical fiction to explore Maud and Frank’s relationship and the inspiration for Oz as it gave her some leeway to read between the lines of the documented record. According to Letts, most of the story is based on known fact, but the inspiration for the character of Dorothy is not well-established. Letts postulates that Dorothy is based on the daughter for which Maud and Frank pined.

Letts alternates between episodes in Maud’s life and 1938, when Maud meets Judy Garland, the vulnerable ingenue set to play Dorothy. Maud instantly appreciates Judy’s innate talent and star quality, and senses a sadness and longing that matches that of the fictional Dorothy. Maud is compelled to protect Judy, in the same way she wants to protect the image of Dorothy, and Frank’s legacy.

Letts successfully weaves in a wealth of detail about the time period, women’s roles in society, and early Hollywood, and ultimately shows us a portrait of a remarkable marriage. While this pandemic may have you wishing for anyplace but home, Finding Dorothy reminds us that somewhere, over the rainbow, skies are blue.

Christine Perkins is the executive director of the Whatcom County Library System. WCLS brings the power of sharing to rural Whatcom County, including a wide variety of online resources at https://www.wcls.org/info. Hours and services may have changed due to the pandemic, so go to https://www.wcls.org or call 360-305-3600 before you visit for the most up-to-date information.