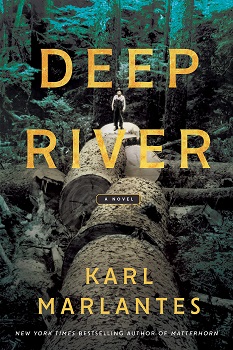 In his debut novel, Matterhorn, based on his experiences as a Marine in Vietnam, Pacific Northwest author Karl Marlantes established himself as a master of evocative settings and characters developed over time. Deep River, his second novel, is a sprawling family epic set along the mouth of the Columbia River against Washington state’s early logging industry.

Befallen by tragedy and suffering at the hands of Russian imperialism in Finland, Ilmari Koski leaves his homeland to settle in a small community of Finnish immigrants along Deep River (based on the Naselle River) that feeds into Willapa Bay. As he looks for a wife, Ilmari clears forest to farm and establishes a blacksmithing operation.

When brother Matti and strong-willed sister Aino arrive from Finland, Matti finds work felling old-growth timber and Aino follows him to the logging camp to live in the “henhouse” with the other women putting in long hours to keep the loggers fed. Marlantes describes the appalling living conditions and unremitting danger facing the loggers with historical accuracy.

Aino is spurred to action by the injuries and deaths she witnesses, joining the IWW (derogatorily called “Wobblies”) and organizing loggers for better pay and living conditions, safer working conditions and eight-hour workdays. Throughout the novel, Aino is fiercely dedicated to the struggle for One Big Union; repeatedly risking imprisonment, her reputation and relationships with even those who are closest to her.

Although Aino is the central character, dozens of other well-drawn characters populate Deep River’s pages as the story unfolds in lumber camps, dance halls, brothels, farms and union organizing meetings during the years between 1893 and 1932.

Because Marlantes is fascinated with myth and believes symbols are meaningful in our personal and cultural development, Deep River pays homage to several mythical stories. Aino’s journey pays respect to the “Amor and Psyche” myth describing a young woman’s journey into womanhood. And many of Deep River’s main characters mirror those in The Kalevala, a Finnish text based on ancient shamanic songs that could be said to form the bedrock of the Finnish culture.

Thought not autobiographical, Marlantes’ characters are also developed from direct experience. Growing up just south of the mouth of the Columbia in the logging town of Seaside, Oregon, he fished with his grandfather, a commercial fisherman. Finnish was his mother’s first language, and the Daily Worker communist newspaper was a fixture on his grandmother’s kitchen table. He knows sisu firsthand, as well as the Finnish stoicism cultivated in the face of unrelenting winters.

Deep River preserves the story of a generation of immigrants who came to the Pacific Northwest at a time when there were no roads and built their lives amid towering old-growth forests that are almost beyond imagining. Marlantes superbly captures this complex time in American history, including the fear of foreigners taking jobs and resources, making the book especially relevant today.

Reader comments on Amazon are calling for this story to be a mini-series—a Lonesome Dove for the Pacific Northwest, if you will. At 700-plus pages, Deep River is a commitment, but once caught in its current, be prepared to be swept along to its conclusion and arrive with a deeper knowledge of this beautiful corner of the country’s history.

Lisa Gresham is the Collection Services Manager at the Whatcom County Library System. WCLS is celebrating its 75th year of sharing stories with the rural parts of Whatcom County.  If you live outside the city limits of Bellingham, you can apply for a WCLS library card at https://www.wcls.org/get-a-library-card